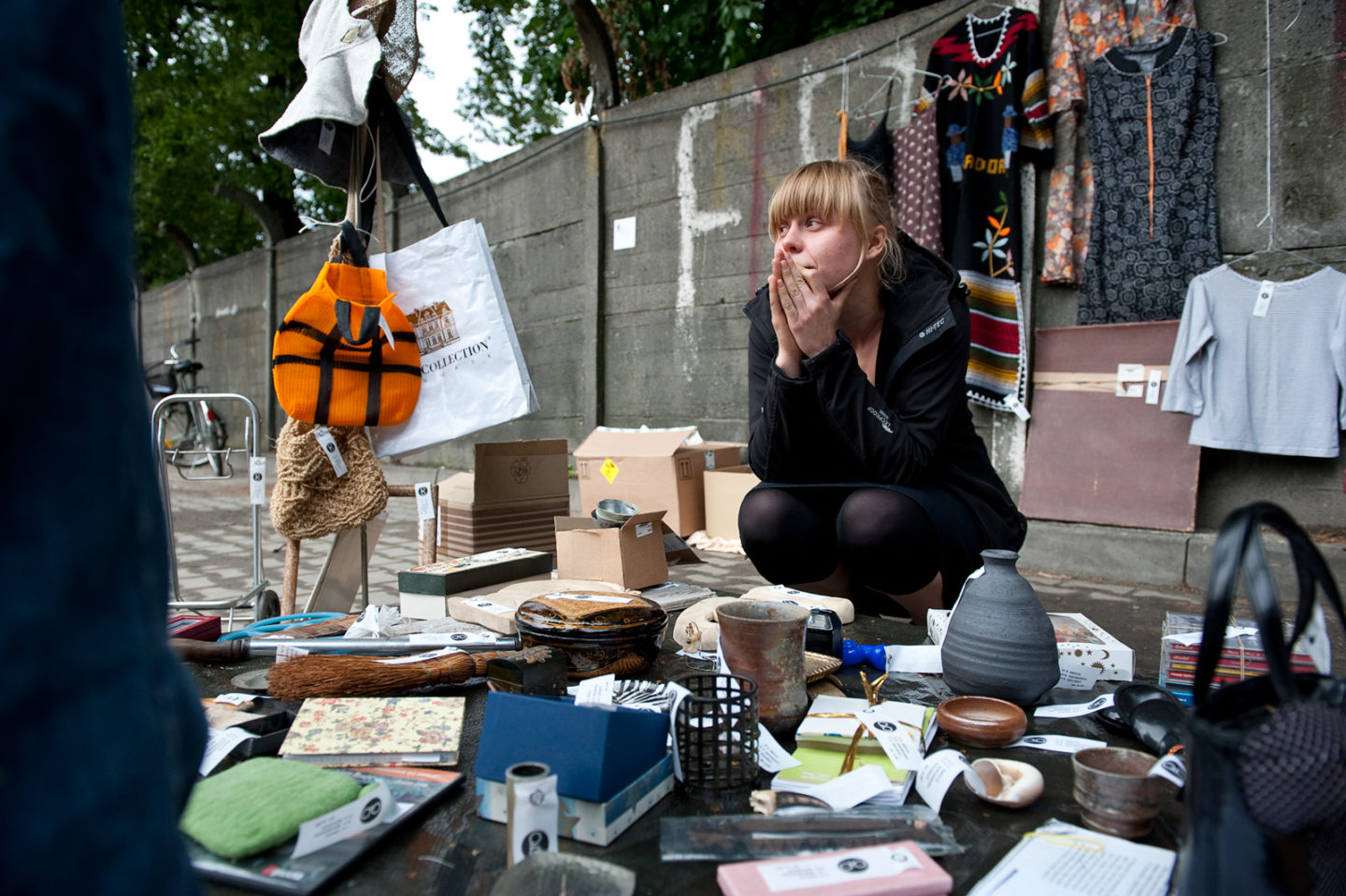 The venue for the 10th edition of the SURVIVAL Art Review was the ‘Oławka’ stadium, a picturesque training complex with well-kept sporting facilities which were renovated in 2008. For years there used to be the ‘Niskie Łąki’ bazaar attracting a near-cult following. ‘Oławka’ is situated close to the city centre despite lying out of the way of the main routes.

Referring to the sports character of the venue, the motto of the 10th edition of SURVIVAL, which was UP TO YOU, encapsulated all the things normally identified with sport and physical culture – at least at the level of the official language of politics and the media, which often intentionally overlooks the dark side of sports games. Thus it was about fair play, ‘healthy competition’ whose participants engage in an exhausting but fair struggle with the weaknesses and limitations of their own bodies and characters. The same motto, due to its liberal, almost simplistic overtone – as if taken directly from an advertising campaign of a sports accessories manufacturer – added irony to the solemn rhetoric of self-improvement, quote unquote. The context of a gymnasion, which used to be a flea market until recently, introduced an interesting play on meanings, making it possible to mix solemnity with unpretentious mediocrity lacking in all ambition. It could also make us ponder some notions tightly connected with the world of contemporary sport, such as excess and exaggeration.

SURVIVAL 10 pointed out to a certain analogy, too. Just like in a sports tournament, the area of visual arts is subject to fierce competition. In this struggle, only a handful of ‘competitors’ (i.e. artists, but also curators, critics, art dealers etc.) succeed in ‘securing top position’ and then keeping it. An elaborate system of competitions facilitates ‘art games’ and turns the contestants into ‘representatives’ of various institutions and milieus. Those who took the best positions in national rankings may represent their countries at an international level, competing for laurels and recognition in the global world of art.

As it was accurately noticed by Xawery Stańczyk in his text A Stadium as a Metaphor of Organising the World of Art, which is included in this catalogue, a sports stadium added an interesting dimension to the jubilee edition of SURVIVAL, which had been organised for exactly ten years in Wrocław, situating it in a broader context of art ‘games’. ‘The sports edition of SURVIVAL was an opportunity for the organisers to self-reflect. Although they are not in the Premiership yet, they left the amateur league a long time ago and there is no coming back to its ludic spontaneity – if they do not want to be out, they have to run faster all the time’, the author wrote. This analogy to sport perfectly describes the situation of the Review, which, subjecting the submitted work to the process of selection for years, also takes part in the race, like it or not.

Apart from Xawery Stańczyk’s text, which we mentioned above, this catalogue includes a text of Anna Stec, in which the author not only gives her account of the exhibition at ‘Oławka’, but also briefly introduces the history of SURVIVAL, describing the changes it has undergone and the problems it faces. Joanna Kobyłt in her text A Hurdle Race. A Spectacle of Art and Sport considers the idea of a commodity as a tool used by the spectacle in order to gain total control of life, which is exemplified both by sport and art (culture as the star commodity of spectacular society). The author poses the question whether the sphere of art may escape, even for a brief moment, the logic of establishing social relationships around the commodity, quoting as an example of ‘cracks in the spectacle’ the open-air market (actually, a flea market) and nearby allotments (situated in the immediate proximity of the ‘Oławka’ stadium).

We included in this catalogue the photographs of all the 50 artworks presented during the tenth edition of the SURVIVAL Art Review – artworks chosen by means of a competition and created especially for the unique context of ‘Oławka’ and the Euro 2012 football championship taking place at the same time in Wrocław – and added commentaries written by Joanna Kobyłt, Anna Stec, Xawery Stańczyk, Kuba Żary and the curators of the Review. These commentaries are supposed to outline some tracks of interpretation, constituting a kind of guided tour of the exhibition.

We would like to thank all the artists for their participation and commitment, and the regular collaborators – for their consistency and perseverance, which made it possible to carry out the tenth edition of SURVIVAL. We would also like to extend our thanks to all the artists and collaborators who made it possible to create the previous editions of the Review – from 2003 and 2004 in the former Soviet barracks in ul. Koszarowa, to those held in the City Brewery, at the Central Railway Station, in pl. Teatralny, in the Four Temples District, in the Feature Films Studio, in the Strzegomski air-raid shelter, to the last year’s edition in the S. Tołpa park. During the last ten years more than three hundred artists, both debutants and acclaimed ones, presented their artworks as part of SURVIVAL.