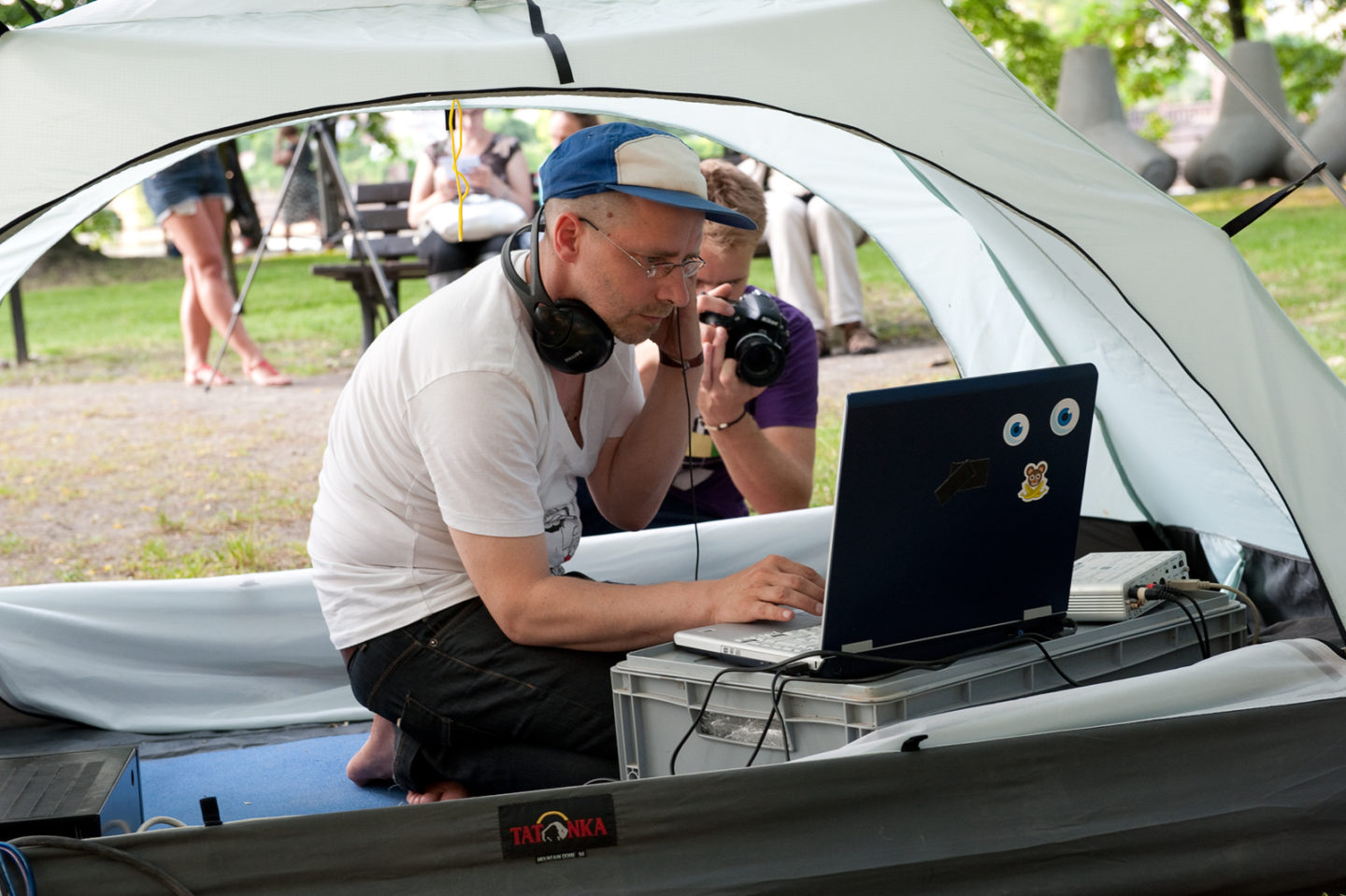 What seems to be characteristic of contemporary artistic actions is their fluid presence in the transitory sphere between the so-called ‘world of art’ and the reality of our everyday existence – to quote Jacques Derrida, in the sphere of parergon, constituted by the frames in case of a painting. Contemporary art not so much crosses the established boundaries of the ‘world of art’ (as did the avant-garde in the 20th century) as moves freely between the sphere of art and the everyday. For that reason I think that this year’s motto of  SURVIVAL – ‘We’re Sailing!’ – apart from its literal reference to the river (or more broadly: to water), encapsulated a metaphor of new art which transgresses the frames of a painting in order to become a manifestation of the everyday. That is how I perceive the sound actions carried out during  SURVIVAL: their presence, which was a testimony to art, unnoticeably, maybe accidentally, began to fill up the sphere of the everyday, becoming a natural element of the place where it emerged, which eventually influenced our thinking about and relating to that space, the river and the city.

The relation between sound art and the urban environment seems to be nothing out of the ordinary: sound naturally finds an outlet from enclosed spaces – like cracks in the frame of a painting – and even when it is squeezed into cramped concert halls, its influence frequently manages to spread beyond them. It is even more so in the case of sound art that has been purposefully intended to be exhibited (is ‘exhibiting’ the right word here, since the painting has already burst its frames?) in the vast area of a river in the city centre. The sounds of survival’s installations travelled with the ‘sound boat’ and, as it was easily measurable, penetrated not only the riversides but also more distant streets and squares, resonating among church walls and houses, bridges and riverbanks, more or less clearly audible, reaching their target with a surprising stereophonic effect or an eerie echo. The sounds floated, coming out from a floating boat, the river flowed and so did people – on riverboats, along the riverbanks, on foot, by bikes, in their cars. There was nothing permanent. The sounds vanished. The river keeps flowing. The transience of art highlighted the transience of our existence.

However, SURVIVAL brought about a certain change – but was it permanent? A change in how the river, including its sonic dimension, was perceived by the city. Art emphasised the river, which after all has always been a constituent element of the city, one that beautified it, posed a threat, created an obstacle. There is no place now to indulge in a disquisition on the cultural and social meaning of the Oder for the city, how the river was lost and how it is being reclaimed. Suffice it to refer to the sounds of the river, as did survival’s art. The truth is that the river is mute for a considerable part of the inhabitants of the city. Its voice sounds weak against the intensity of the urban soundscape, too fragile, almost meaningless. In our research on the soundscape of Wrocław 11 I.e. the studies conducted by the Soundscape Research Studio at the Institute of Cultural Studies of the University of Wrocław; more information at http://pracownia.audiosfery.uni.wroc.pl/english-version/ (accessed on 1 August 2013). ↩︎, we try to restore meaning to the voice of the Oder; we eavesdrop on it, differentiating between its intimate rustle, dense swoosh, rhythmical splash. The field recording workshops which we ran during SURVIVAL served a similar purpose. The sound installations on the Oder brought back the sounds of the river: amplified them, sometimes transformed them and made them unreal 22 In that respect, it was especially the installations by Gerard Lebik (Ton von Odra Tiefen), Konrad Gmurka and Paweł Kowzan. ↩︎, turning our ears to the aquatic sounds, both ‘external’ and ‘internal’, coming out deep from the riverbed, from underneath the surface. As one of the listeners commented accurately about SURVIVAL’s Sound Art Forum, the sounds from the depths of the river turned out to resemble the organic pulsation of our bodies 33 Anna Siwik’s comment on Paweł Kowzan’s installation, which may well be extended to most of the other actions. ↩︎.

Perhaps the decisive factor for the aesthetic (and existential) perception of SURVIVAL’s sound art was its spatial context. Consciously or not, the sounds of the installations built a spatial awareness of events and of the vastness of the venue. Connections with ambient music seem to be natural and obvious here. Characteristically, this music integrates the space instead of interfering with it; due to its repetitiveness, it is embedded in the space and simultaneously liberates us from it by poeticising everyday occurrences. As the recipients emphasised, they experienced feelings of vastness of the horizon, of unidentifiable remoteness or floating – which may be interpreted as indicative of experiencing a river, which keeps flowing and carrying its waters into the unknown. Or maybe the destination is well-known and inevitable: to our own surprise, the sounds of the installations evoked in us the looming presence of the sea, as resulting from the adopted perspective of a river. For the call of the sea is absent in our experiencing of the Oder in Wrocław, so distant from it that we tend to perceive the river as enclosed water, surrounded by the city from all sides. Unexpectedly, we discovered the vastness of our river and its never-ending, eternal perspective, its way leading towards seas, oceans, depths 44 This association with the sea was particularly real in the case of Paweł Kulczyński’s installation, whose electronically- processed sounds resembled the sea organ in Zadar, Croatia. ↩︎.

The presence of the sound actions influenced – creativity-wise – the perception of time, too, fostering a sense of detachment from the neutral (proceeding at its own pace) dynamics of city life. It is worth emphasising that the date of SURVIVAL was fixed for a special time in the everyday life of the city, a weekend early in the summer when the boulevards along the river bustled with tourists and local people wanting to get some air, and the river itself was swarming with boats and ships. Against such a background, the narrative of the sound actions, as put forward by their authors, triggered a change in the subjective perception of time of the entire situation, as if the events slowed down a little 55 It was particularly palpable in the case of the installations by Paweł Kulczyński and Wojciech Kucharczyk. ↩︎. In that way, due to the sounds of the installations, the reality of the Saturday afternoon assumed the character of an event captured in a frame, perhaps in inverted commas or followed by a question mark.

If we perceive survival’s sound actions as a process of intervention in the urban environment, attention must be paid to interaction at the phonic level. With respect to that, it may be assumed that SURVIVAL fully consciously counted on randomness. The coincidence of the artistic sound actions and the noise of the city was both inevitable and clear, resulting in interesting, or sometimes surprising, effects. Even before the actions began, the observers of the Sound Art Forum had serious doubts whether this part of the city would accept additional sonic intervention in its natural phonic activity. Let us mention some of the most immediately noticeable elements constituting the urban soundscape of the venue: music of a Scottish piper who was performing in Piotr Włostowic Boulevard; bells tolling from the Cathedral in Ostrów Tumski; traffic noise from Most Pokoju, Plac Nankiera and Most Piaskowy; far-away echoes of a concert in Wyspa Słodowa; birds calling loudly from the trees on riversides; finally, the noise of river boats on the Oder (including the music played on board) and speedboats slicing impetuously through the water. This diverse soundscape with complicated sonic texture cast doubt on whether it could be possible to achieve ‘sonic harmony’ of the installations and their surroundings, as it had been promised in the Review’s announcement 66 As the organisers wrote, “The idea of this year’s Sound Art Forum is to present music which intentionally exists in harmony with the surroundings” (cf. http:// www.survival.art.pl/,92, accessed on 1 August 2013). It may be assumed that this idea is not restricted solely to the phenomenon of sound, but involves integration with the cityscape at all levels. This issue was addressed in Anna Siwik’s opinion about the Review. ↩︎.

However, I can remember at least several moments like that, when the installations reached full concordance with the soundscape of the surroundings, creating a feeling of belonging, integrity, which would unequivocally confirm Shafer’s idea of a soundscape as a grand sonic symphony of the city. After all, the thorny issue (which does not have to be settled here) of where the presence of a sound installation finishes and the sounds of the surroundings begin was also manifested in the utterances of witnesses-participants of SURVIVAL, which seems to confirm both Murray Schafer’s conception and the claims of this year’s Review.

If we interpret the SURVIVAL’s Sound Art Forum events not only – or not mainly – as artistic occurrences but as a conscious attempt to interfere with the cityscape, we must emphasise yet again that the emerging relation refers not only to the presence of a sound in spatial, time or phonic contexts, but to meanings and values, as understood in terms of building the cultural identity of the city. We should therefore connect the presence of survival’s sound actions with the meaning of the river for Wrocław, as it is discussed above. The sound actions were unexpectedly, and probably spontaneously, crowned by Wagner’s Ride of the Valkyries performed by a speeding ‘sound boat’ in the light of the setting sun 77 As it later turned out, it was a (spontaneous?) initiative of the technical crew who operated with the artists during the sound projections on the boat. ↩︎. A humorous effect? Probably as well. However, one of the observers of survival’s Sound Art Forum proposed a far deeper interpretation, drawing on the city’s complicated history: “Funny though the Ride of the Valkyries from the tiny boat might have seemed, it reminded me of the German history of the city. This year the Germans are celebrating the 200th anniversary of Frederick William III’s call for national mobilization against Napoleon, and of the 1813 Leipzig Battle of the Nations, where Napoleon was defeated. To mark the 100th anniversary of these events, the Centennial Hall in Wrocław was built, which in turn led to this year’s celebrations in the city. At the same time, in May fell the 200th anniversary of Richard Wagner’s birth (who was born in 1813 in Leipzig). Wagner ‘at full blast’ on the Oder in Wrocław – it sounded as a hint of those days” 88 Joanna Gul’s utterance. ↩︎. The observer later went on to form an interesting association between a galloping Valkyrie and a painting she once saw – a personification of the river as a woman-warrior, suggesting in that way yet another thread of interpretation of the artistic event on / by the Oder. Perhaps by accident, the motto of  SURVIVAL was given another reference, this time – historical.