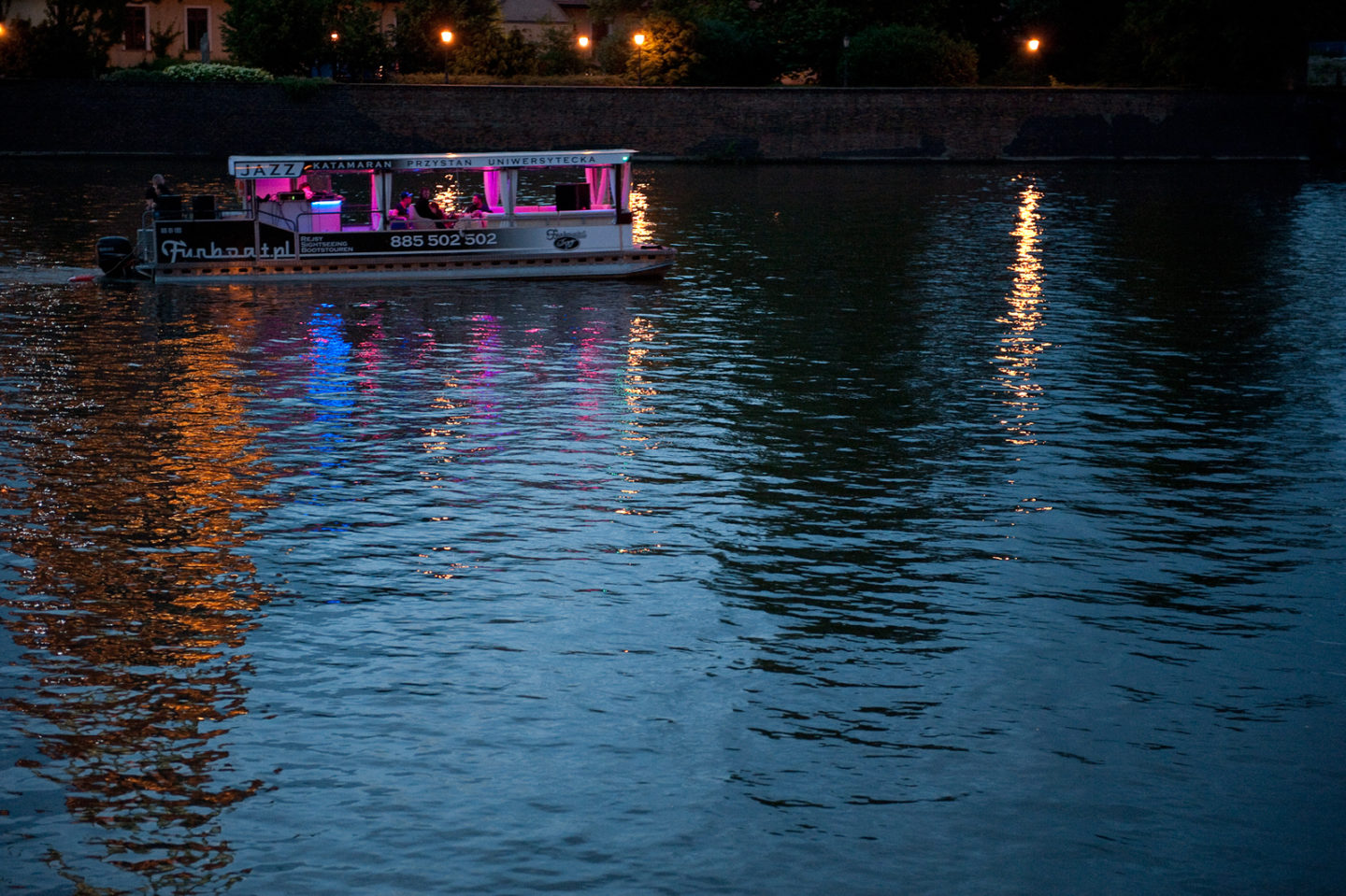 > Bartek Lis
curator of the debates

The river is a great unknown. Harnessing it, restraining or conceptualising must inevitably end up in failure. For how is one supposed to understand an intangible, incessantly flowing object that changes its place, running away from the observer toward the sea? Mystery provokes us. Deep in the river current, underneath the dark blue or green waters, thoughts drown together with questions and secrets. The river has always stirred up imagination. It fascinates and never fails to surprise. Little wonder then that the organisers of SURVIVAL took up the challenge. Artists as well as culture experts, sociologists, journalists and architects – all of them had a ‘river tale’ to share with the inhabitants of Wrocław and visitors on these days.

We decided to take the notion of a river as a pretext for reflection upon the flowing time, consciousness (of ourselves and of the world that surrounds us) and our urban identity. Professor Adam Grobler, a philosopher, took us for a cruise on the Oder (On the River, 22 June 2013). We had initially intended to set off from the Piaskowa marina, but the river would not let us do so and it was necessary to modify our plans. The torrential rains in Lower Silesia in the weeks preceding the 11th edition of the SURVIVAL Art Review made it impossible to normally use the river. The elevated water levels forced us to change the route. Fortunately, we did set off in order to emerge in a philosophical disputation about transience, time, and the origins of all beings. The scenery on the riverbanks changed, as did the issues raised and arguments supporting the idea that nothing is obvious, nothing can be taken for granted, no one can be fully understood. Moments, instants, random events, chance – these are the bits making up our biographies. Repeating after Heraclitus that ‘everything flows’ puts us in danger of slipping into banality. But need simple things be banal? – undoubtedly wondered many a participant of the Oder cruise. Change, a theme central to the discourse of the Ionian philosopher of nature, still seems to be one of the essential elements of the world. Standing still, remaining immobile is nowadays frequently equated with lack of progress, or even backwardness. That is why the Enlightenment ideal of rational advancement and progress as the proper way of conduct of ‘civilized’ societies (Eurocentrism) was supposed to become a universal principle for all peoples. Tough luck that many misunderstood the idea of rationalism and progress, coining their own definitions of the ‘perfecting’ of nations. The horrible effects of such thinking/acting were described by many, with Adorno prominently among them. This corrupted spirit of rationalism was symbolically reminded when the boat passed the Wagenburg squat – attacked in November 2012 by a group of fascists, who reached this place on their crusade to clear the ‘ancient Polish city’ of all ‘lefties’.

Alejandro Capdevila, a Catalan architect and designer, resolved to literally connect his life with a river. On one Saturday evening, he wittily and convincingly praised the advantages of living on a river (Everything Flows. Architecture Too…, 22 June 2013). Alejandro is the co-creator of a number of simple solutions which make it possible to ‘build’ a house on a river. To date, the guys from ‘Isola System’ (company coowned by Capdevila) have launched all over the world several dozen of inhabitable platforms, which have all the necessary functions of a dwelling house. They are characterised by modern design, minimalism, simplicity and a pinch of spine-tingling when a passing canoeist peeps through the window when you are in the shower. In Wrocław, a city embedded in the Oder, living on the river is not popular yet. Capdevila praised not only the practical aspects of living on the water (the costs of living in such a ‘flat’ may be significantly lower compared to a traditional space), but he also referred to the hippie idea of life without ever putting down roots. Living a life of a rolling stone, traveler, flâneur – is it a change we are ready for?

Wrocław’s culture and cityscape may have changed due to its being situated on the Oder. Guests invited by the sociologist Katarzyna Kajdanek (Maria Wiernikowska – a journalist, Jacek Pluta – a sociologist, Henryk Macała and Jerzy Sznerch – city councilors, The 1997 Flood – Unique Combination of Carnival and Labour Camp. Has the Great Flood created Wroclawians?, 23 June 2013) discussed whether and how the 1997 flood triggered a sense of togetherness among the inhabitants. Is it true to say that the contemporary inhabitants of Wrocław were ‘born’ only after this (literally) extreme experience? It is a question about the permanence of change, of certain social capitals triggered by an unusual situation (here: a flood), one of them being the ability to self-organise in the face of a destructive force. Trust, liking, selflessness (although not pure, since even the inhabitants of districts situated far from the river were obviously interested in the city as such, around which local identity was built) – these are the crucial fundaments of those days. We could hear a large number of testimonies to the uniqueness of that summer. Partially with admiration and partially with envy of such a unifying experience (I come from Gdańsk, where the year 1997 marked nothing but the celebrations of the city’s millennium), I think about the permanence of positive change brought about by an extraordinary situation. Being integrated around a simple and clear message, which makes it easy to weave an emotional narrative, is an unusual state that must necessarily come to an end. A carnival may only last up until a given moment, otherwise it ceases to be a carnival. Bangladesh, inundated with a monotonous regularity, in European media remains dry. The water which destroys Bangladeshi houses is something obvious, common… natural. Only things out of the ordinary deserve our attention as well as the subsequent excitement and potential involvement. The rains stopped, the water levels dropped, Wrocław dried up and fortunately managed to keep the disaster at bay. People returned to their homes. Cooperation, human kindness and openness to others probably lasted for some time, but not long enough, since we still feel dissatisfaction, a deficit of emotions and words that would bring us together and help to move forward. Yet again something passed, something floated away.

On the same day when we discussed the flood, I met Maria Wiernikowska again on my way home. The journalist was leaning against the railing on Piaskowy Bridge – probably gazing at Ostrów Tumski, or the shocking artwork made by Agnieszka Popek-Banach and Kamil Banach. When she noticed me, I stopped for a while to say goodbye, remembering that she was going back to Warsaw on the following day. The customary exchange of pleasantries turned into a long walk by the river, with frequent stops and equally frequent changes of topic. The flood, which is what many people still associate the reporter with (for me personally, the Great Flood – as many people like to call the 1997 disaster – will always have Wiernikowska’s face; I constructed my mental image of the memorable July upon her reports from the besieged city), was just one thread of our discussion. Holidays in the countryside, the ‘weirdness’ of contemporary art, masculinity and Jewish identity – such diverse and seemingly non-related topics may be connected by a river. Time passed by unnoticed, my bus came, and we said goodbye.

This edition of SURVIVAL’s debates was probably the most diversified, both in terms of venues and, most of all, subjects. It revealed a variety of threads, symbols and uses of a river in our existence and artistic practice. We did not exhaust any of the topics, none of them dried up, we simply sailed ahead, hoping to catch – albeit for a moment – a glimpse of the real world before it changes again.