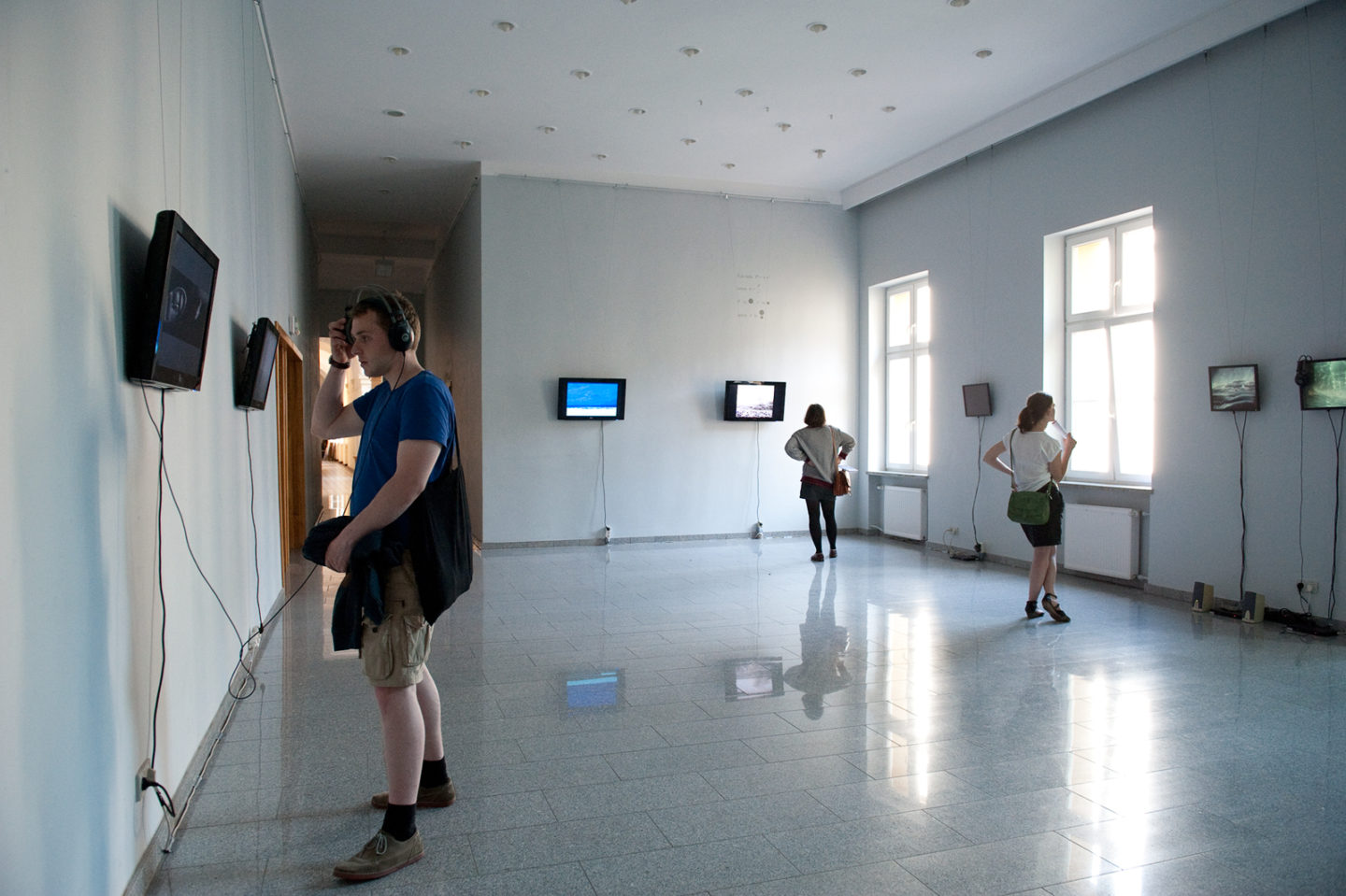 Moonlight skimming the surface of a puddle is the very first scene of Double Dream – YOUKI HIRAKAWA’s two-channel video installation. Later, Hirakawa juxtaposes the image of a man sleeping in a floating boat with raindrops drawing little circles on the water sheet. A woman is drowning in the abyss of the black water. Fortunately, all this is but a bad dream. When the night ends, the man and the woman wake up; however, they are still in a hypnosis-like state. As a matter of fact, from the very beginning they seem to be daydreaming, as if half-aware of the imaginary reality which surrounds them.

Youki Hirakawa’s video intrigues the viewer with its oneiric image, woven at the border between two people’s sleep and imagination, which is the genius loci guarding the Nakagawa canal. Yet their dreams are directed towards the past rather than the future, illustrating the history and atmosphere of the enigmatic canal, the abandoned factories and the life that is no more. In part, the dream is about water, either in the form of rain which promises cleansing or the black abyss of the canal (which, by the way, constitutes a passageway from one world to another), which may be perceived as an allegory of life, transience and death.

The past, the power of imagination and the directing of dreams are the main subjects of a video by another Japanese artist – AKI NAKAZAWA. In her Sui Sha Shi / Water-graphed Portrait, she uses four short autobiographical stories, which are inextricably connected with water, to create the portrait of her inner self, which she terms a water-graphed portrait. The rain falling in the first story – the inspiration for making the film – prompts the artist to leave home and cast a glance into her heart of hearts, bring to light the memories hidden in her subconsciousness. The second part is a dream about a world flooded by the sea at night, a world in which people love water and do not need to be afraid of it because they are… fish. The last two tales – more abstract than the previous ones – constitute a retrospection of traumatic events and an attempt to face them. The whole is concluded by the artist’s soliloquy, which bridges all the four parts of the video:

WHEN IT RAINS I HAVE TO GO OUT
TO FIND MY BODY,
MY FORM THAT I STILL FEEL,
MY EXISTENCE HERE.

From Nakazawa’s perspective, water symbolises a limitless number of possibilities to heal and revive the spirit and the body. Rain endows us with a new life and the truth about ourselves.

Sui Sha Shi operates on the border between fiction and reality. An even more subjective image of water, however, is present in MIHAI GRECU’s Coagulate, where he combines reality and 3D imagery, bordering on the edge of dream and hallucination. In his approach, water is a sheet floating above the horizon, as if the matter froze in the air. It fills up the interior of an abandoned building in which the only living beings are a man and a fish. Paradoxically, it it is the fish and not the man that is in its hostile element. The fish, which often symbolises freedom and immortality, is about to end its life in a tiny aquarium without water. Various aquatic twists, maybe due to the title coagulation, turn the laws of physics upside down, thus distorting the existence of living creatures in this peculiar space.

Like Hirakawa, Grecu subjects to artistic interpretation the destructive powers of water, which often result in natural disasters – floods – that largely determine the uniqueness of the water-mancity relations. On the other hand, he examines the harmful impact of modern civilization on water. Coagulate shows a different world, one which seems to be the result of the environmental changes. The flooded empty building does not create a destructive situation, however, and the water floating in the vacuum becomes man’s natural environment, like the air we breathe.

Additional comment on the relations between man and water, or – to put it more broadly – between nature and that which is cultural, is provided by the video-diptych of the GRUPPEFISCH DUO (MARIUS LENEWEIT and ROCIO RODRIGUEZ), entitled …niland 1 and …niland 2. As it was the case with Grecu’s video, the starting point for the creation of …niland was the global warming, which causes the rise of water levels in seas and oceans. Water and air reflect the human impact on the climate, posing questions concerning the ambivalent symbiosis of man and the environment, and investigating the unavoidable confrontation between climatic and cultural changes.

…niland 1 shows the struggle for air under and above the surface of water, which is an attempt to synchronise life in water and on land. Unlike Coagulate, …niland depicts a water world which is not a friendly place to live, in spite of all its appeal. On the seabed, there is a drowned body of a girl dressed in a white robe. Shortly after, Rocio Rodriguez, wrapped in plastic, emerges from the water in panic, as if she was waking up from a nightmare. The second part – …niland 2 – begins with the image of a man cast by the sea on the shore (Marius Leneweit). Is he alive? The image is fuzzy, steamed up, and there is water trickling down the camera lens. After a while, it deblurs, and we see a man who stands up only to submerge himself in water. Instead of an aqualung, he has a jar on his head. Leneweit’s outfit also draws our attention – instead of a diving suit, he is wearing fisherman’s overalls. He is treading tirelessly on the muddy seabed, finding his way between the water sheet and the glow of sunrays in the cloudy water, which makes it hard to tell the difference between water and air.

…niland is a fictitious land, most probably a noman’s land, or maybe inhabited by epinephelus marginatus – the dusky grouper (German: gruppefisch) – an edible fish that dwells in rock caves in solitude. Perhaps it is its instincts that compel it to stay away from light and the fishing net.

Although most of the works showed water as such, two videos stood out – SEOUNGHO CHO’s Blue Desert and KURT D’HAESELEER’s Fossilization. Even though the former refers to the Death Valley desert, in its visual layer it generates images of water, and its audio sphere simulates the sounds of the ocean. Like the ultrasound impulses in …niland, the swoosh of surf is created here by electronically processed sounds and images which order digital chaos into a sophisticated waterscape. The mirage of a steaming desert, which becomes transformed into water in the camera lens, blurs the image into dreamlike abstraction. Thus the desert ceases to be but an empty void and utopian phantasmagoria and becomes a place of liberating freedom which aestheticises the reality.

In D’Haeseleer’s Fossilization, frames overlap in layers. In the background lies an electronicallyprocessed subtle image, as if diluted or projected on a water sheet, thus appearing to be liquid and blurred. Cars with their wheels turned upwards have become fossilized wrecks on the seabed. Houses and cars remain where they always used to be. In spite of an imminent catastrophe, the material culture is left untouched. Even the people running away from a sandstorm freeze in the process of fossilization. Have they too become part and parcel of that culture, products of the culture industry?

Due to its asceticism and simplicity of the means of expression, one work stands out against all the others – ŁUKASZ GRONOWSKI’s Untitled Works. Consciously abandoning the sophisticated image processing techniques in favour of natural sounds, the artist captures a real situation of banal activities in unusual surroundings. The sea is hidden behind thick fog, barely visible, and the Sopot pier seems to be floating in the void. The optical illusion is triggered by evaporation, which dematerialises the scenery around the pier. The seaside retreat is manifested solely by the swoosh of waves and seagulls’ cries. Soon, however, the serenity is shattered by the whirr of a digger which disturbs the everyday life on the shore.

Untitled Works shows a present situation, without flashbacks or flashforwards, concerning the inextricable bond between man and water, and the destructive influence of the former on water ecosystems, as it was depicted in previously described works by other artists. This video provides a subtle stimulus for green thinking about the seaside environment and underwater life.

The works presented at the Double Dream exhibition show both real and fictitious worlds, emphasising their dependence on water. Virtually all of them depict water, although its state varies. Water may be in the form of rain, river or sea. Sometimes it becomes a volatile fog, and sometimes it is absent in its physical form – being but an optical illusion or the effect of electronic image processing.

Nevertheless, the literal presence of water seems to be the starting point for more metaphysical references and questions concerning the existence of man. The artists’ ponderings on water ecosystems and climate change lead to fundamental questions about our culture and place in the world. Water, which is part of the natural environment, defines and shapes the human being, reveals the truth about ourselves, emphasises the ambivalent symbiosis of man and the environment by showing the effects of cultural assimilation of ever greater stretches of nature, and reflects the changes in the natural ecosystem, which is threatened by the expanding civilization. 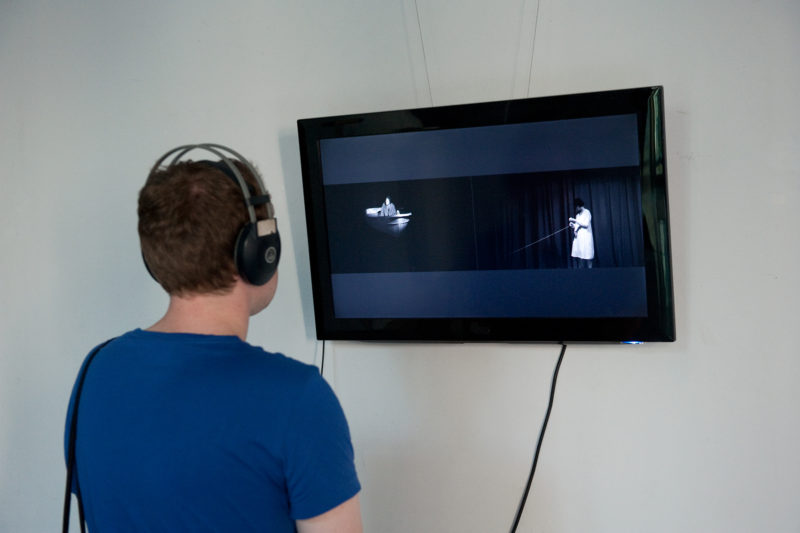 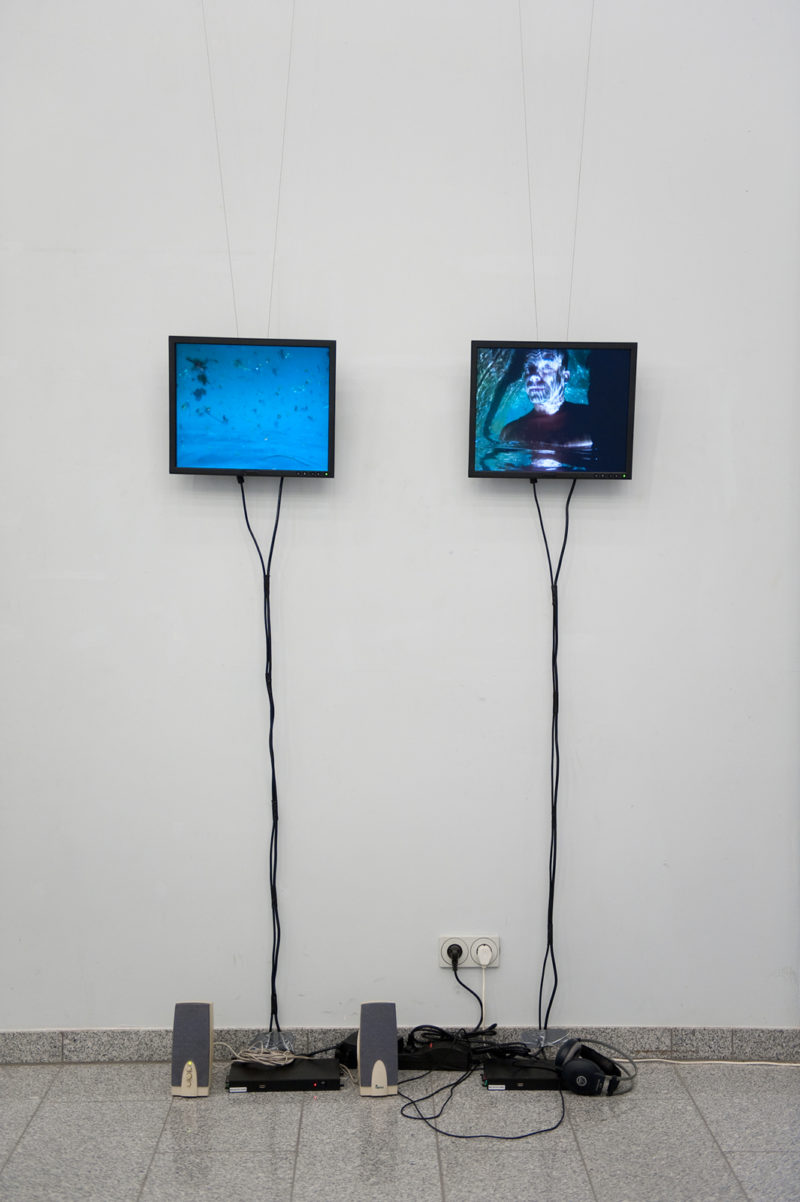