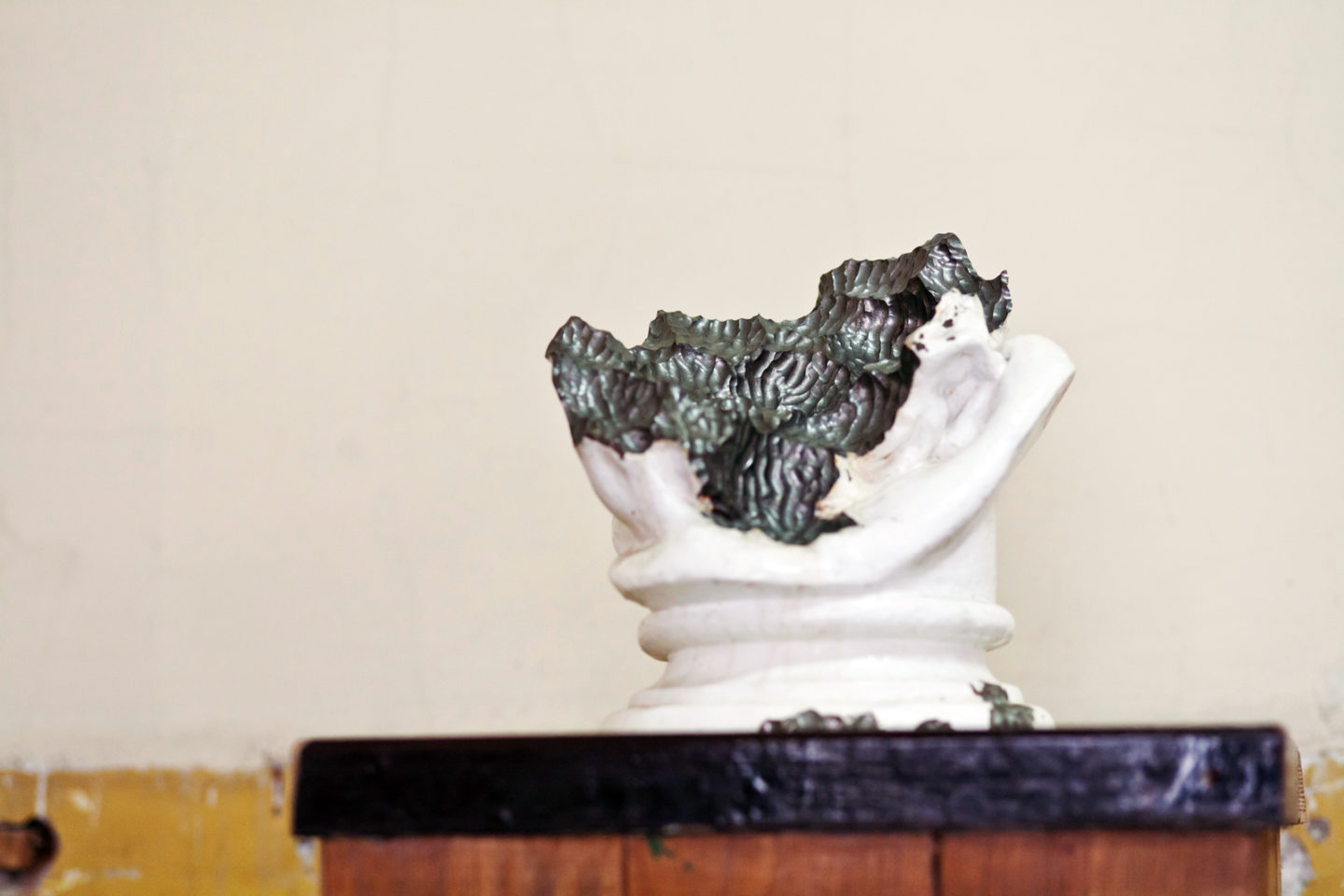 The Lootland project refers to the phenomenon of looting, which was ubiquitous in the so-called Western Borderland. It is also an attempt to analyse a set of notions with liquid boundaries (theft/pillage/appropriation). The exhibition situated in an integral part of the former Riot Police Barracks, which consisted of three rooms forming an enfilade and the nearby corridor, transfers the visitor in space and time to “year 0”, i.e. 1945, albeit remembering about the contemporary context and making indirect references to the history of the edifice. Barracking does not exclusively refer to the context of the police/militia – it can also describe the growing numbers of newcomers, typical of the situation in 1945. Those who came to Wrocław after the war preferred the densely developed district of Nadodrze because they felt safer among other people. The luxurious villas were rarely chosen due to the fear of plunderers or Red Army soldiers looking for appropriated treasures, which would often lead to beating up, loss of belongings or even life. The new law and order constituted itself among the surviving property, both real and movable, that changed ownership in a suspicious way.

The thesis of the project assumes that the inescapable relativism of identity as dictated by history leads to a fluctuation of ethical notions. This fluctuation, also in its formal sense, constitutes the basis for the main part of the presentation. Olaf Brzeski’s object Sculpture Eaten by a Snail thus becomes the non-textual motto of the Lootland exhibition by making an abstract reference to the phenomenon of looting and likening the looters to pests in an ecosystem, who do damage in order to survive, relying on the only survival strategy they know. Sublimation and fluctuation, as well as other ways of turning one thing into another, consitute the subject of almost all the artworks making up the project. The alchemy of these processes is hidden in a mundane everyday action of organising life in the existing reality. It occurs on the eve of the day when the dust stirred by the war settles down, on the eve of the day when the new order comes. Agnieszka Osiecka’s lyrics to the song Before Daybreak, performed by Edmund Fetting at the beginning of the film The Law and the Fist, which depicts everyday life in the so-called Regained Territories, reveal a yearning for “normalcy” that is being constantly postponed “by a day or two”. This normalcy will come, but not today. For some, fearing the return of the Germans, it did not arrive until the late 1960s. The general feeling of temporariness all the more served to emphasise the absurd of excessive hoarding and the uncontrollable need to keep things, which made the pockets of those fleeing from the Golden Sesame heavy. Beyond doubt, the Western Borderland was indeed such Sesame or Golden Eldorado.

The union of the set called Regained Territories contains not only Wrocław and Lower Silesia but also a greater part of the northern and western territories of what became the People’s Republic of Poland and subsequently – the Third Republic. It thus constitutes a kind of distorting mirror of the mythical Kresy, or Eastern Borderland, which had been lost by Poland. Bearing it in mind, one might risk an argument that looting in the Western Borderland was an “eye for an eye” gesture of revenge not against the real perpetrators, but rather historical injustice.

Dy Tagowska is an artist and curator born in Wrocław in 1985. Her maternal grandparents came to live near Wrocław in 1945, having been resettled from Podolia.