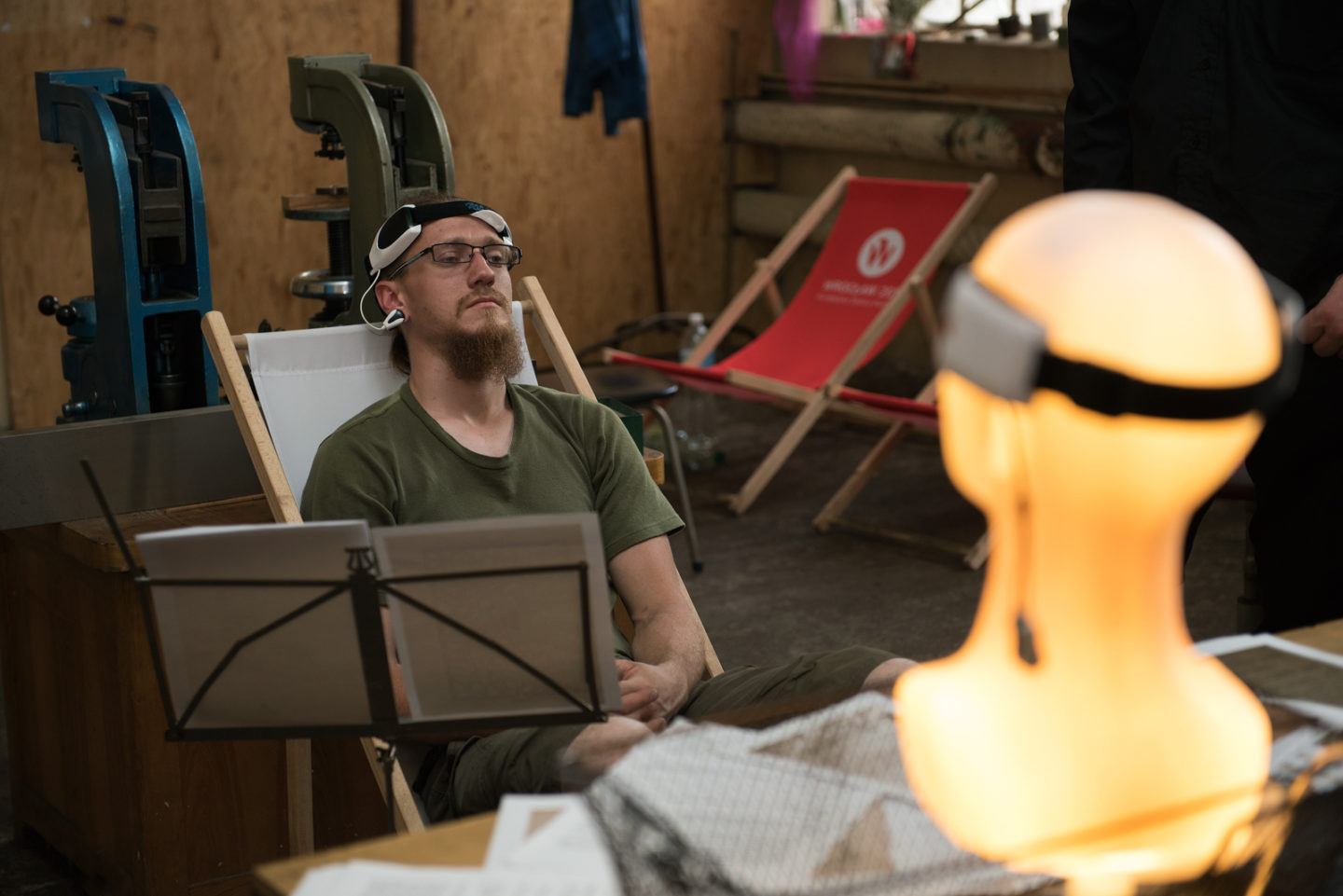 Among the numerous types of factory soundscapes, one seems particularly interesting to me due to its somewhat paradoxical character. Making musical instruments is usually associated with a quiet workshop of a luthier rather than a noisy production floor of a factory. Meanwhile, the technology of producing musical instruments is extremely varied, depending on their kinds, sizes and degree of complexity.

Films released by makers of various instruments provide us with rather ridiculous clues concerning the common perception of the sounds accompanying the production process – thus Internet videos show the bodies of clarinets made by lathing machines to the accompaniment of … Mozart’s clarinet concertos, while constructing a saxophone sounds like good jazz. Apparently, it is thought that music should hide the actual noise of people’s and machines’ work. Finding a footage containing the true sounds of the production process in today’s musical instrument factories is difficult.

Tools and instruments for making sounds have for centuries been produced from natural materials, such as timber, leather, bones, intestines, fruit shells, animal mails, later also metal. The sonic environment of making instruments did not differ from the soundscape of everyday life and work. Throughout centuries, the most important system of working on an instrument was based on the craftsmanship of one master (luthiers, makers of pianos, organs, trumpets), sometimes with the assistance of apprentices. Each instrument made in such a workshop was clearly marked by its maker, who simultaneously designed it and could make any corrections or alterations. This system of working coupled with the creative genius of the master guaranteed the highest quality, which is the reason for our admiration for Stradivariuses, Guarneriuses and other masterly instruments. Nowadays, luthiers, often aided by their children, still base their work on this system.

The outwork system used to be another production method, often used in lutherie. Established on the principle of dividing work into stages, it involved several groups of specialised craftsmen producing in their respective workshops the individual elements: bodies, necks, fingerboards, pegboxes and bridges of instruments such as violins, violas, cellos or guitars, which were later put together in another workshop. Instruments made through outwork did not bear the brand of an individual maker; they were repetitive and commonly thought to be worse than instruments made by masters, who were fully qualified in their professions. The soundscape of the outwork system would thus be repetitive, albeit different in each workshop. It was not until the last workshop that the sound of the entire, finished instrument could be heard.

Introducing machine work in industrial production in the 19th century brought about revolutionary changes in the process of constructing musical instruments. Instrument manufacturing facilities all over the world turned into specialised factories, in the literal sense of the term: equipped with heavy machinery powered by steam engines or electric motors, they often employed tens or even hundreds of workers in sawmills, drying rooms, paint shops and foundries. Since specialisation was introduced in production, large instruments, such as piano, could be assembled from parts made in different factories responsible for providing elements such as keyboards or piano mechanisms. The number of musical elements produced globally at the turn of the 20th century was huge – for instance, the biggest piano factories churned out even several thousand pianos per year, and there were thousands of them in the world – many more than we think today. Any larger manufacturer of musical instruments in the 19th century proudly labelled itself “factory.”

The mechanisation of the sphere of producing musical instruments fundamentally revolutionised not only the manufacturing process, but also the soundscape of this line of work. Although some instruments have for a long time been made in factories, the common misconception regarding this process is that it is based on relatively quiet sequences of actions. Meanwhile, watching the construction of a piano and all its components, for instance, makes us realise that it occurs to the accompaniment of thoroughly industrial sounds: from cutting the trees with chainsaws, transporting them, the multistage processing of timber, drying it, storing, to cutting the necessary surfaces and elements, gluing them together, pressing, sanding, nailing, varnishing, polishing, etc. The process of casting the steel frame of the piano is pure smelting, which may come as a surprise since we rarely perceive this instrument as the product of red-hot furnaces. Even equipping the body with strings is a noisy stage because it is necessary to drill holes in the pin block and nail the turning and hitch pins. Only at the stage of constructing the piano mechanism do we enter the less noisy areas of the factory. The subsequent actions of tuning and regulating bring us closer to the ultimate sound of the instrument. The effect of all this complicated work – the readymade piano – hides in itself a gigantic sphere of sounds that it has “experienced” since its “birth.” This kind of factory soundscape is typical, to a varying degree, of other kinds of instruments, such as woodwind instruments, which are lathed.

The mechanisation of the production process has resulted not only in efficiency gains, but also in increased precision and optimisation of many technical aspects, which makes it possible to construct instruments meeting very high standards or, in some cases, larger and louder than before. Although machine work streamlines many processes, its excess negatively impacts on the quality of sound. For instance, overmechanisation of the production of string instruments such as violins or guitars has led to a marked decrease of their quality in comparison with those made in traditional workshops. Manual labour is still an indispensable element of work at any musical instrument factory; it requires highly qualified specialists, especially in the final stages of production. It is this aspect of handiwork that decisively inf luences an instrument’s ultimate quality of sounds. Despite the existence of large factories serially and repetitively producing instruments, there still are lutheries or organ building workshops in which one person is solely responsible for the appearance of an instrument and the tone it produces, overseeing the whole process from the very beginning until the end.

Irrespective of where an instrument is made, the final stages of its construction produce relatively quiet and subtle sounds. For example, one of the last phases of making a violin is its varnishing, which requires a separate room and lots of focus and care. Silence and acute sense of hearing is necessary to check the sound quality of each instrument, tune it or correct if need be.

The physical matter of an instrument – its body – is produced amidst noise of varying intensity. However, it must always be preceded by thought or intention, which usually emerges in silence. Only later is it possible to endow the idea with a material, sonic shape.

The sounds emitted during the production process have been rarely used in musical compositions. As a musical material, they have been noted by Paweł Romańczuk and his band Małe Instrumenty, which was the natural result of Romańczuk’s work as an experimental instruments constructor who also records his compositions in a room adjacent to his workshop. When building untypical instruments with an unknown sound quality and a slowly emerging shape, the sphere of manual work and the sound of the tools used in the production process naturally merges with attempts to sonify the instruments. Samoróbka, an album by Małe Instrumenty, is an artistic project that is directly connected with making musical instruments. At the same time, it is a part of Paweł Romańczuk’s book titled Domowe eksperymenty z instrumentami muzycznymi (Experimenting with musical instruments at home), which provides the readers with instructions for building instruments and soundmaking tools at home, using everyday objects and recycled materials.