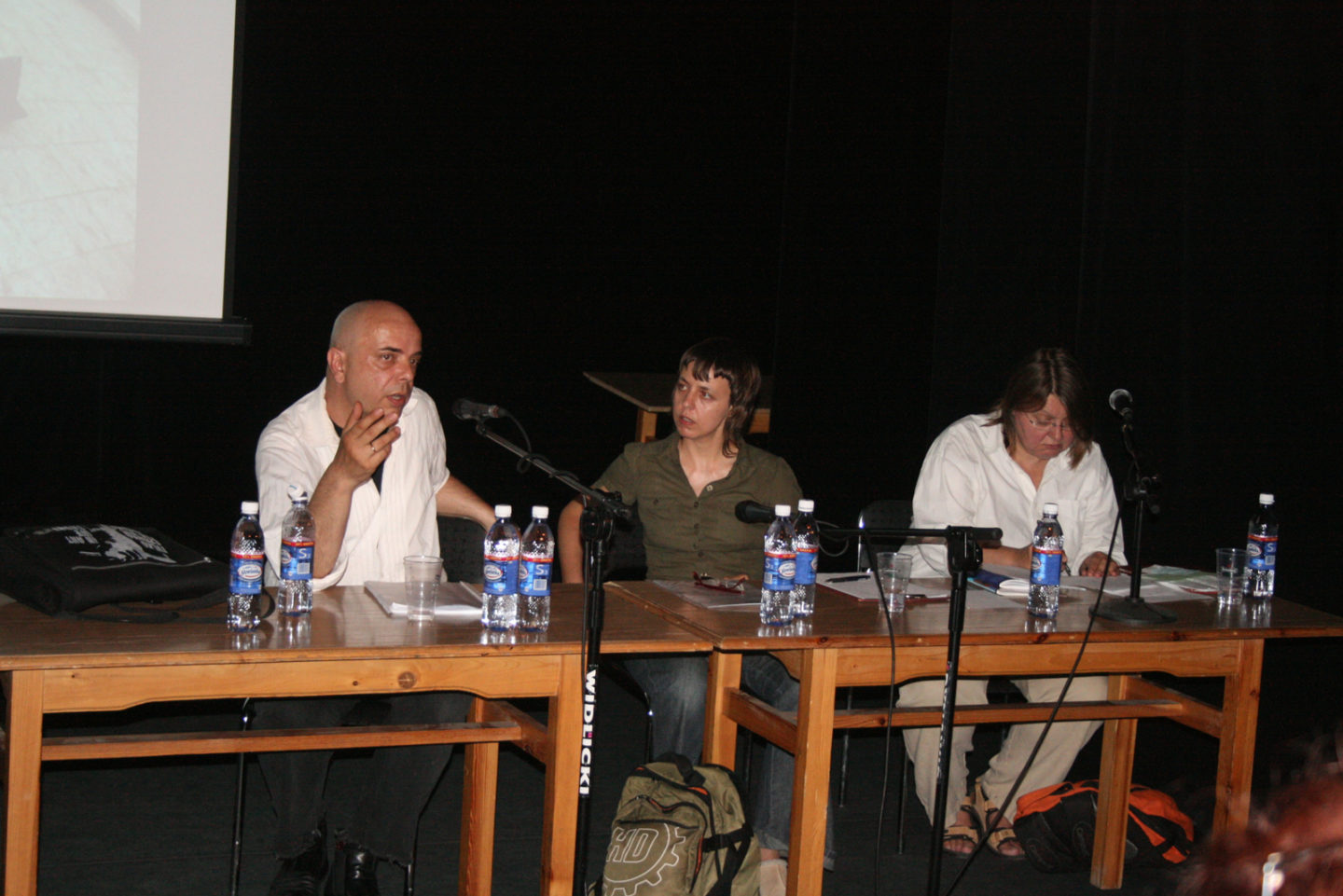 Since the early 1970s there have been many definitions of what public art really is. One of the most original says that public art is nothing else but outdoor sculptures, which have been built wherever there was some empty space to be filled. In a sense, this is still true. Does public art serve the common good?

* The text was created after the discussion panel ‘Art in Public Space”, chaired by Agnieszka Mos. The panel was held on the last day of this year’s edition of SURVIVAL

The fate of public art was sealed when artists-creators took the floor. Public art lost some of its ludic nature and opted for esthetics. Obviously, for many years and decades the decorative function of art was perceived differently. Nowadays, most monuments in the public space are defined as kitsch. Not so long age Anda Rottenberg said that art in the public space is to broaden one’s horizons. In 2003, she was one of the first to organise an open discussion about the shape and dimension of art which accompanies us on a daily basis. Not much later it turned out that all the assumptions the artists arrived at were crushed by the officials who commisioned and put colourful cows in the centre of Warsaw. ‘I liked those cows a lot’, said one of the officials, ‘In Warsaw there is a lack of such cheerful projects. Maybe there will be some motifs connected with Warsaw on the cows, or maybe one of them will turn into the Mermaid?’.

The beginning of public art was murals, stained glass, sculpture, and not much later manifestations, instal-lations and eco-art. In Wrocław, the presence of sculpture of the kind criticised by all the artists taking part in the panel discussion is manifested most visibly. Do contemporary artists care more about distributing their works and public approval than the esthetics of the works? None of the recent Wrocław sculptures does what public art is supposed to do; none contrasts the otherness, the different nor shows the centuries-long city history. None refers directly to the identity of Wrocław as a centre for transferred and expelled people. How many of the works we can see in our city hide the problems we should face, how many of them stop at cosmetics or section off an artificial space in public territory?

A monument has a special role in the public sphere. Not only does it fill the ’empty space a contemporary passer-by is not used to, but it also acts as a time machine, This is, at least, its most basic assumption and the purest intention. A monument aims at dialogue. tells the posterity what we were used to, what was important for us and what we used to do in the past. It is also the most traditional object in the city space, which can only be compared to ‘live’ grafitti, If we know that much about the function of monuments in the contemporary world, why do we let kitsch, overscaled, deformed or ridicualous works appear in the public domain over and over again? Why is the message of the works subjected to ludic or entertaining functions, instead of the practical function, as it happens elsewhere?

Perhaps the city space was long ago taken over by industry and eco-nomics. What is left for art is a narrow margin fought for by artists, but also by investors and the authorities. Pierre Bourdieu says that there is a constant struggle in the public sphere, which can be described as ‘symbolic violence’ and which results in creating an unacceptable field of reality. Is this how we should understand the emergence of the monuments of Bolesław Chrobry, the Flood Victim, Dwarfs, Chopin and the Siberian Deportees Square? How far in these and many other similar works in Poland is the artists extreme narcissism and ignorance of important matters revealed? Is ugly art cheaper than beautiful? How are we to define and later defend what belongs to us in the public domain?

Perhaps the public space in the contemporary Poland has not been divided yet and we do not feel responsible for it. In everyday arguments about the shape or size of space for everybody we forget that, apart from people, this space needs proofs of remembering. Remembering not only about history and great personalities, which all too often are presented from a caricatural perspective, but also about good taste. I do not believe that there is an unwritten rule in Poland saying that the monument of the Dragon of Wawel Hill, which belches out fire when you send an SMS, is the height of sophistication.

The sole definition of public art is problematic. Not only because it consists of two elements which are, in a sense, contradictory (art refers to elitarian, narrow and high phenomena, whereas public – to low and common), but because it contains a build-up of selfless idea connected with political involvement. For all art appears in a given context. Grzegorz Dziamski pinpoints the differences in understanding public art when he likens it to a table on which everything is being put together and separated at the same time. Such a conflict of interests can strengthen the idea of community in people, but it can also exacer-bate arguments between different groups. In a nutshell, public art contains quite a revolutionary charge.

What is interesting, each anylysis of art in the public sphere is in fact a close look not at the value of a work, but at the emotions it provokes. The context in which art is created is also important; the context understood as a set of experiences, symbols and the space in its historical sense. After all, some art critics think that there is no such thing as public art; there is only public commision and a given dialogue for public money.

Pawet Jarodzkiss address at the discussion panel was titled: ‘Why?’. Why do we have no influence on the shape of public art in Poland, where we live, and why in this trend of art there is a predilection for works everybody is ashamed of? The author triggered a long and animated discussion which stretched out until late at night.
Is it true that politicians nowadays want to change the reality so fast that they commision more and more monu-ments which have very little in common with good taste? In that case, is not engaged art, street grafitti, the only alternative to conventional public art? Artist more and more often look for the possibility of self-expression with-out the unnecessary red tape.

For some people, monuments and public art, broadly defined, have only the didactic dimension. Therefore, the monuments built in the streets should educate some part of the Polish nation. But does a city’s showpiece, when watched from the tourist’s perspective, need to have such a weak visual ‘mug’? Why do the authorities in Poland have such a had taste? How long has this way of thinking which says that the authorities know best’ been prevalent? And finally, is not it true that in the contemporary city space the best public art can be seen at trade fairs in the centres of big cities?

Wrocław has a special tradition. It is a city with a long history and complex identity. Some people liken it to a passage-city, where nothing can be forever because everybody is living out of a suitcase. Apart from examples of socialist-realist art and typically nationalistic thinking, in Wrocław there is no public art in the positive meaning of the term. Some symbols have been considered safe because they fall outside lustration which is carried out every now and then. Perhaps in democratic times many fear controversies and expressing good taste.

Ewa Zarzycka, who participated in the panel discussion, reminded about the magic of a given space and its efficiency. She referred to the ‘first time’ principle, that is the emregence of something at the beginning of history. She provided examples of ‘first times’ in Lublin, which are either overcrowded or deserted, depending on the tradition of the place in time. Therefore, in the market square area there existed buildings which belonged to a given culture in the past. There was one of each kind (baths, townhall, prison). Nowadays, this number is not exceeded. Miraculously, even if it is, the building is soon after detroyed or transferred to another place. The magical power is sometimes equated with religious power (as it happens in Lichen, which came into being from the symbolic ‘first yellow brick’).

The public sphere abhors good and lasting art, as if art was unable to force itself into that space. Does the border of the notion of ‘space’ run in our heads, or is it something between the officials’ regulations and a public work put out to a fictional tender? Perhaps the Internet has become the only manifestation of freedom in the public space? Iza Kowalczyk’s text submitted for the panel talks about its traps and favourable aura. The Internet has become public domain and a good place for art. Will there be space for creating one’s own monuments in it? Definitely yes. Out of impermanent matter and permanent dream of one’s immortality. 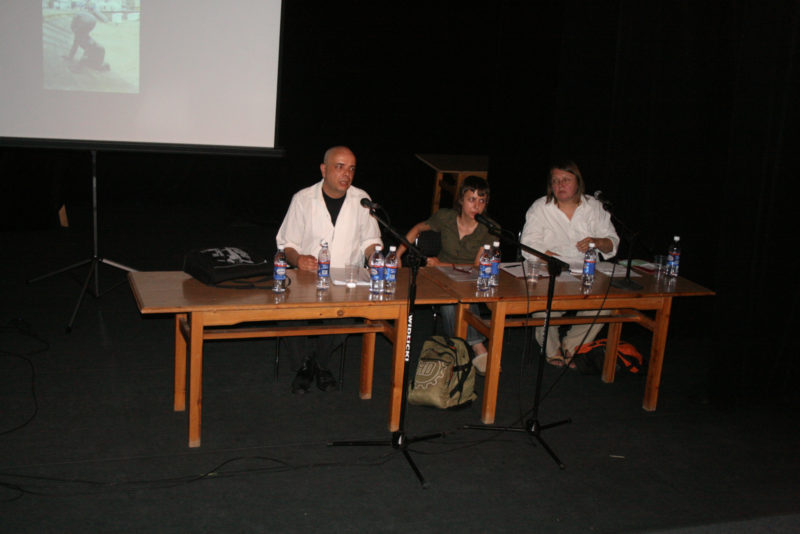 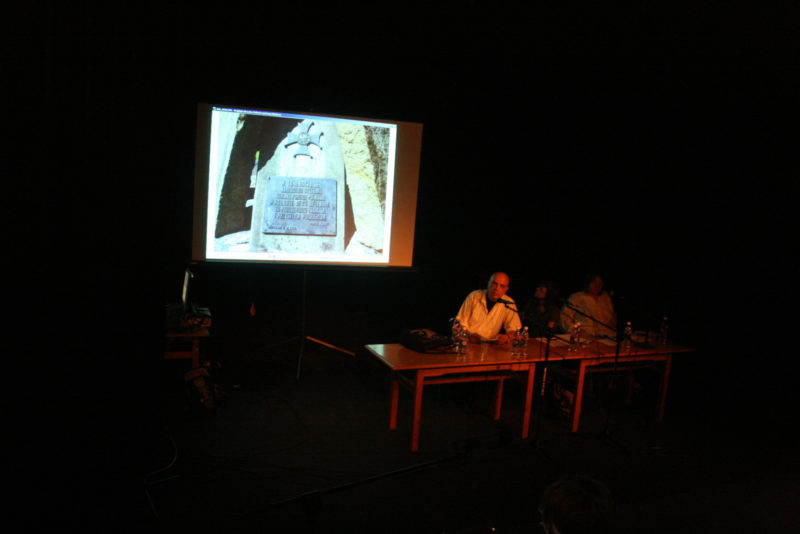 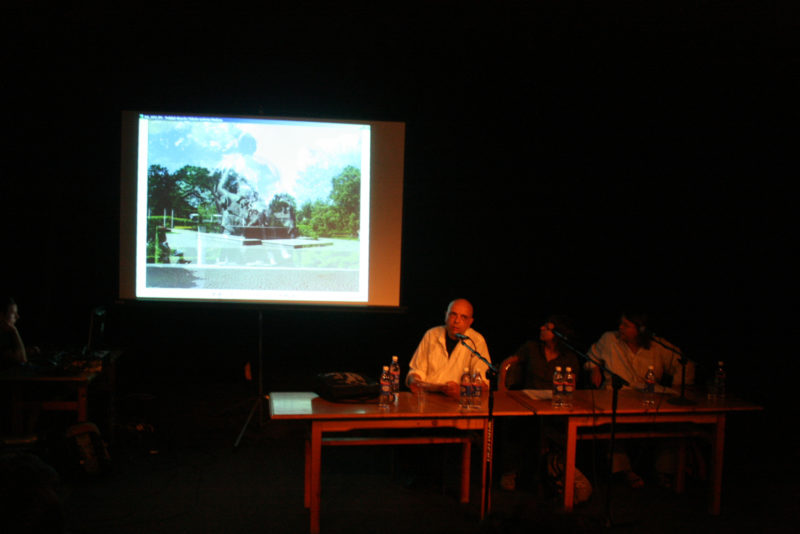 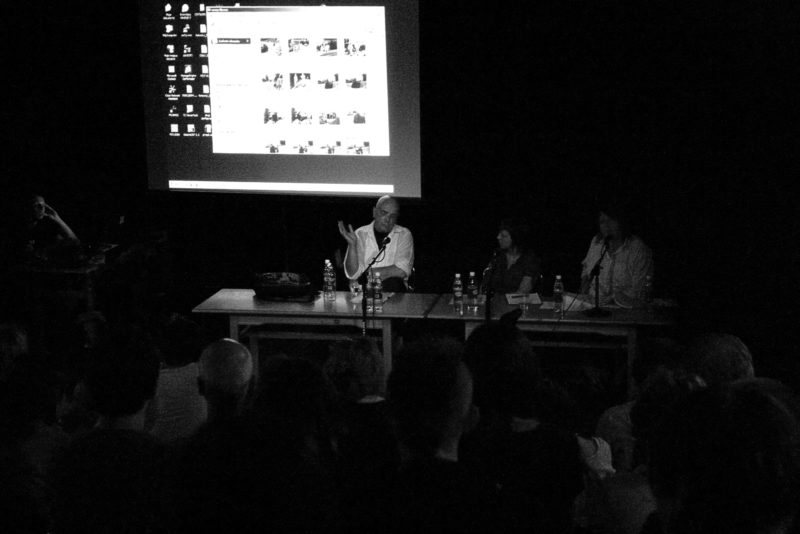 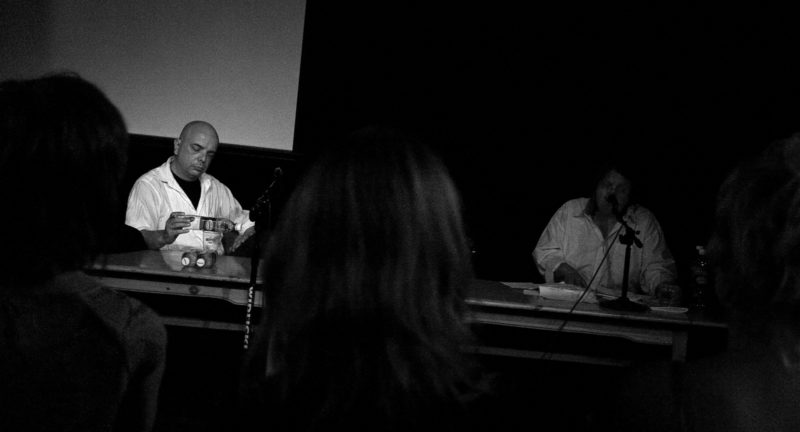 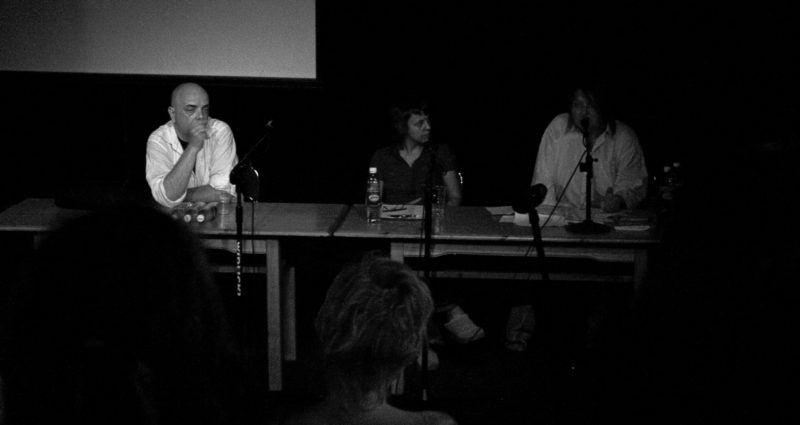 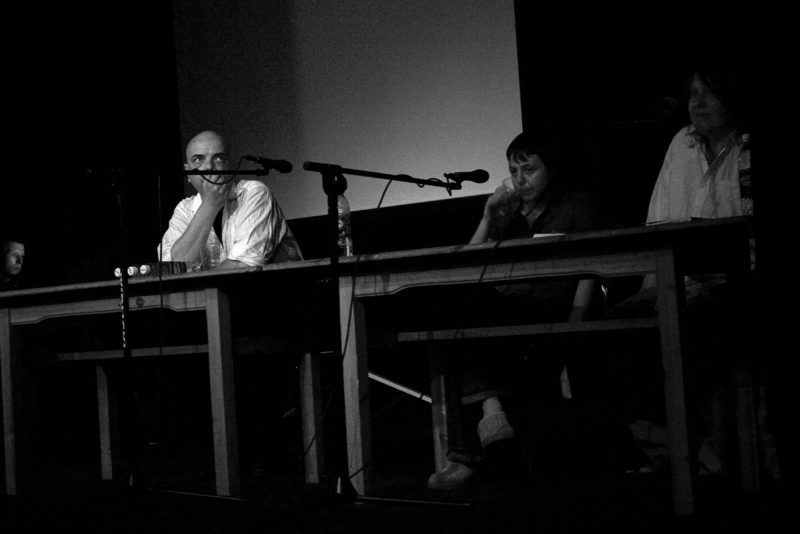 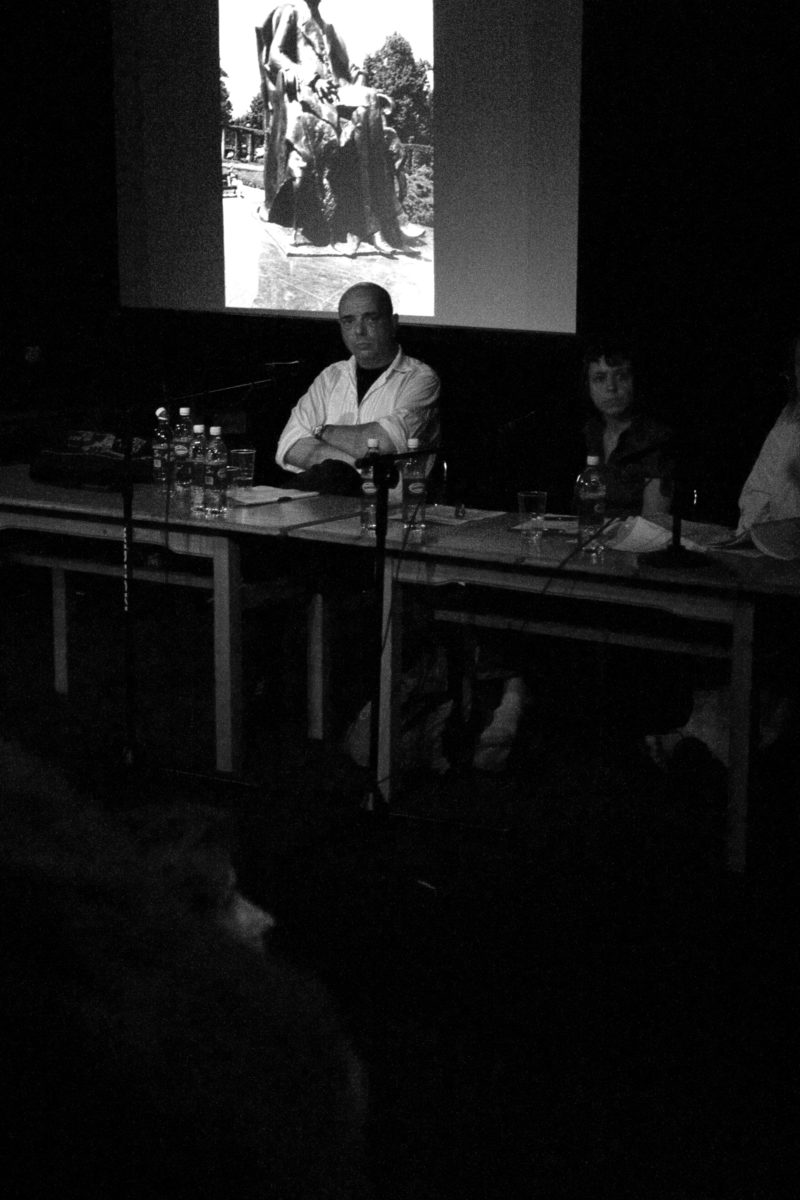