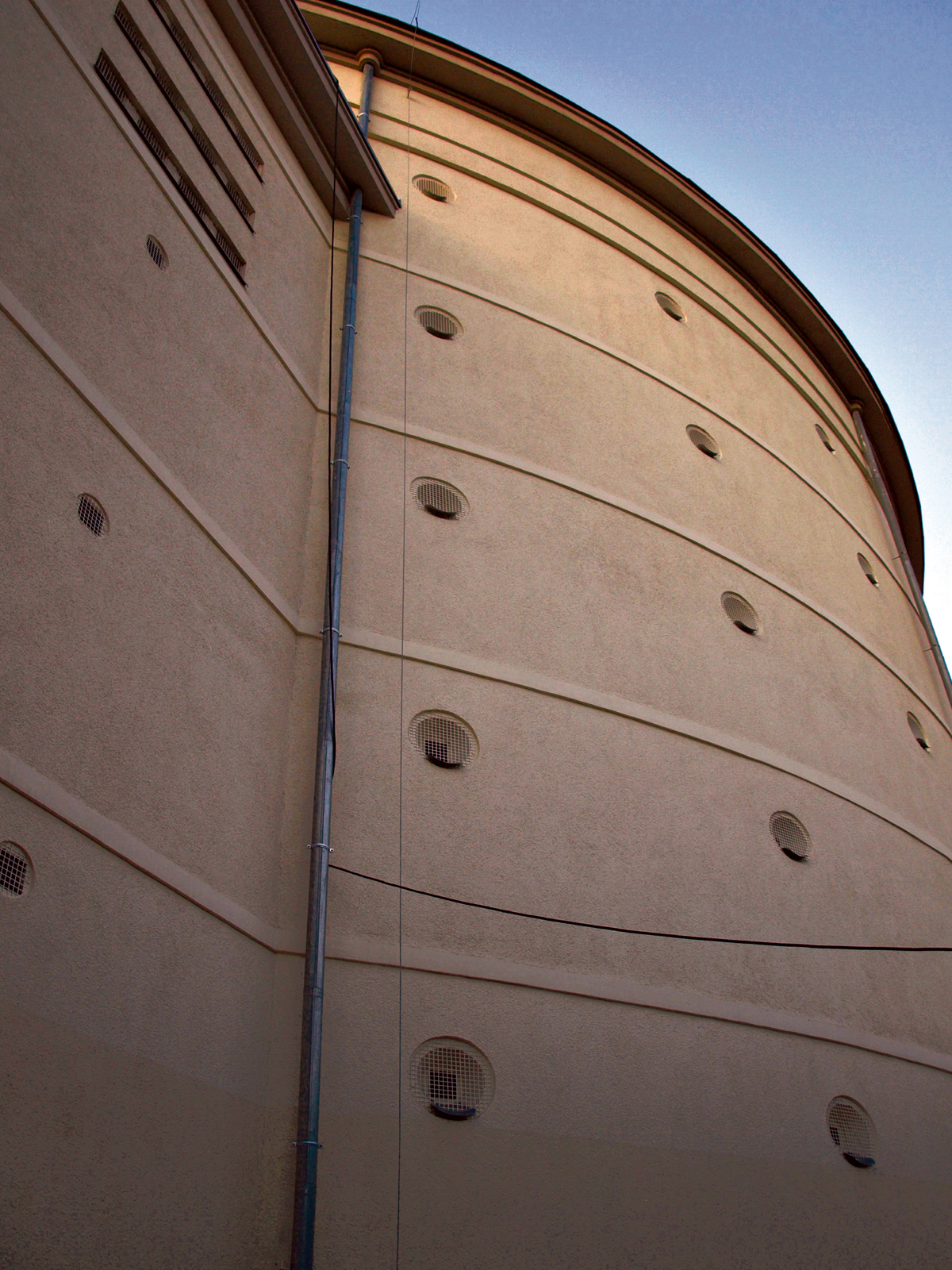 Bunkers, shelters, fortifications, palaces of culture, Utopian skyscrapers – these are some examples of out-of-the-ordinary architecture, built or planned to be built in the event of war, to emphasise the importance of a dictatorship. Sometimes they remained but a vision, a projection of an architect’s unhindered imagination.

Max Berg was the first German architect who wanted to combine the solution to a bothersome problem of the shortages of flats after WWI with the idea of skyscrapers. Bruno Taut, Max Berg and Walter Gropius, the creator of Bauhaus, compared skyscrapers – the temples of human labour – to gothic cathedrals, which once dominated medieval cities. The outcome of Max Berg’s ponderings were several visionary sketches of skyscrapers, embedded in the tissue of Wrocław and built in the years 1919-1921. The most shocking of all were three versions of a skyscraper situated in the marketplace, to the north of the medieval town hall. It stirred angry protest of the then Mayor of Wrocław. It ought to be emphasised that Berg’s ideas never went beyond sketches and visions. They illustrated purely theoretical deliberation and were not intended to be built.

The complex of four air-raid shelters in Wrocław, built during WWII and designed since 1940 by Richard Konwiarz, constitutes a fairly unified complex. The number was insufficient for the needs of such a large city, even in combination with other, underground shelters, but the authorities, blinded by optimistic propaganda which promised Blitzkrieg, never predicted that bombings would include German territory.

The shelters in pl. Strzegomski and ul. Ołbińska were circular in plan, whereas the other two, in ul. Stalowa and ul. Ładna – rectangular. All of them had a reinforced concrete framing, with the walls ca. 0.8m thick and the ceiling ca. 1.4 m. Their architecture represents fairly sophisticated artistic ambitions. It was almost a rule that air-raid shelters built in Nazi Germany had a historicising form of architecture, usually corresponding to the local colour in order to mask their true function more effectively.

The most extraordinary form was given to the shelter in ul. Stalowa. Its classicistic architecture was consciously modelled on the building of the former prison for women in Würzburg designed by Peter Speeth in 1809, which in turn referred to the standards of the French Revolution architecture, as formed in the visionary ideas of Claude-Nocolas Ledoux and Louis Boullée.

The second, rectangular in plan shelter in ul. Ładna, and the two circular ones in pl. Strzegomski and ul. Ołbińska, are not as sophisticated and historically stylised in form as the one in ul. Stalowa. Despite their maximal reduction, the classical origins are still visible, according to the bourgeoisie roots of Nazi aesthetics.

The review or Wrocław’s realisations and plans, created during almost 13 years of the existence of the Third Reich, surprises with its extraordinary scale and panache. Among the unfulfilled plans that were created with the thought of urban development of Wrocław, the most radical ones were Werner March’s, who had previously won renown for the realisation of the Olympic Stadium in Berlin. In Wrocław he worked on the South-North axis, between the Central Railway Station and the ‘governmental’ quarter on the Oder river, and the East-West axis, along the Oder. During his visit to Wrocław in 1938, Hitler showed his appreciation for March’s other design, which involved the creation of a national-social forum south to the Oder. In the centre of the plan, March designed a vast defilade square surrounded by huge representative buildings, such as the seat of the local authorities, 70-meter tall belfry and the Centennial Hall. The implementation of the project, in conjunction with the planned review of the transport system of Wrocław, would require drastic demolition of numerous buildings, including some old ones but in good technical condition. March’s project involved among others the demolishing of Hala Targowa (Market Hall) in ul. Piaskowa, the building of the Fine Arts Academy, Stara Rejencja (the Old District, currently – the National Museum), the Observants’ church and monastery. March’s vision surprises with uncompromising radicalism and unprecedented scale of interference in the historical tissue of the city, which had not experienced war destruction yet. March’s plans concerning Wrocław were unfulfilled for only one reason – first of all, the main ‘Cities of the Movement’ – Berlin, Nuremberg and Munich – were to be rebuilt, and only later all the other citiesseats of district Party offices.

Apart from the Olympic Stadium complex, the biggest and the most important building from that time in Wrocław is the office building in pl. Powstańców Warszawy. Its building was planned as early as 1935. The implementation of Feliks Bräuler’s project lasted up until 1945. The war limited the rich programme of ornamentation. The building meets all the criteria for a stately government building at the time of the Third Reich; thanks to using massive, deep pillar porticoes, its elevations show a strong connection with Albert Speer’s New Reich Chancellery in Berlin. Currently, the building houses the Voivodship Office.

After incorporation to Poland in 1945, a new era started for Wrocław – the authorities had to face the issue of a ‘regained, ancient Polish city’, which was markedly German in character. The situation was complicated by a tragic state of the ruined city, and a question of what to rebuild, what to demolish and what to leave as it was.

However, Polish socialism was quite short-lived; it faded even before 1956 and never gained a wider popularity. In the Museum of Architecture, a set of sketches survived, made by Tadeusz Teodorowicz-Todorowski for a national competition for the development of the Grunwaldzki axis. The work from 1951 is marked by an impressive scale, and the dominant feature took on the form of a much-admired in the USSR ‘palace’, resembling the ‘Pekin’ in Warsaw.