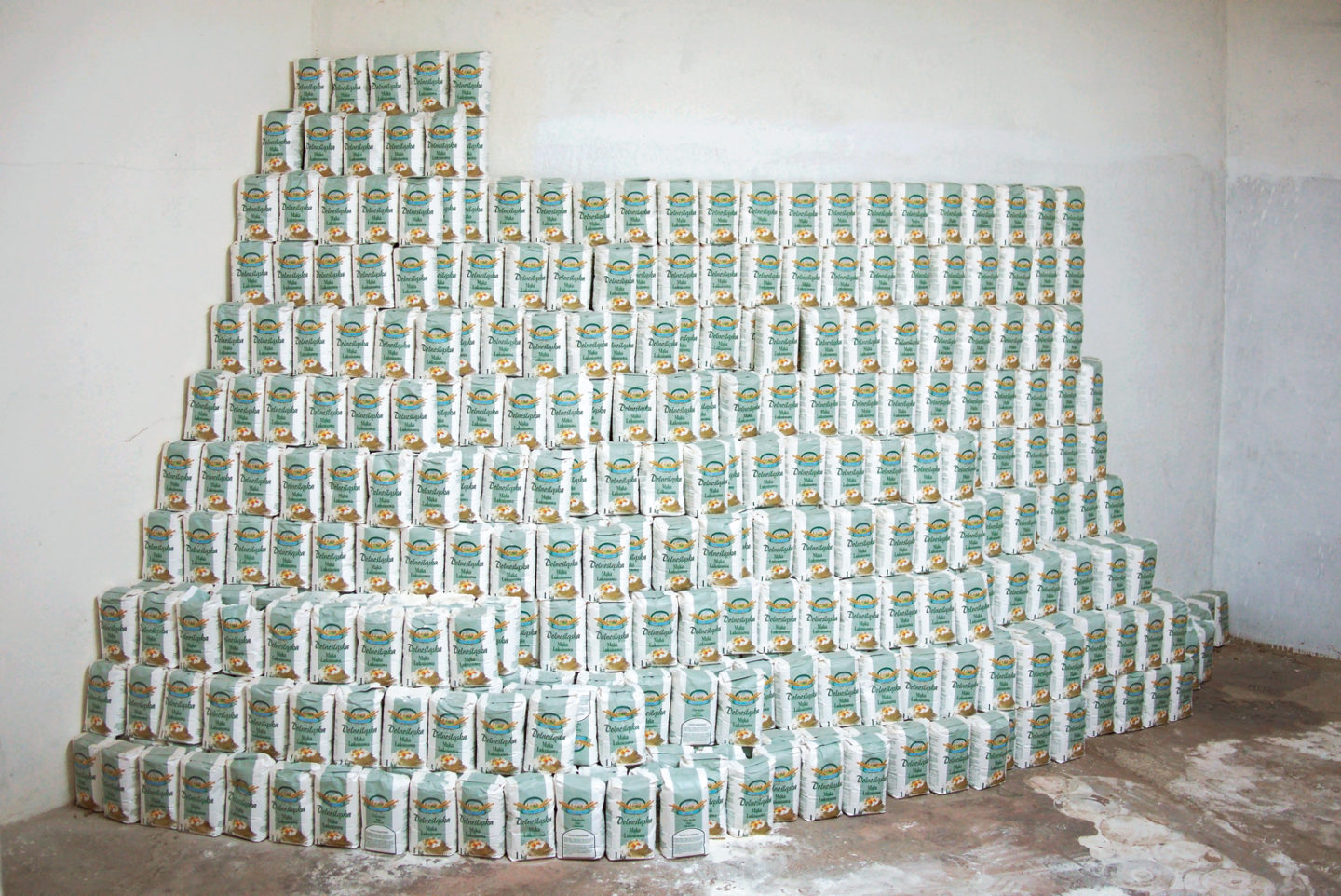 SURVIVAL is changing. The eighth edition had, for the first time, a key phrase. The name has been shortened to Art Review instead of Young Art in Extreme Conditions Review. SURVIVAL is still held in spaces and buildings which are about to be renovated. But this year the venue was special: the bunker (air-raid shelter) in pl. Strzegomski, which in two years’ time will house the Wrocław Museum of Modern Art. SURVIVAL 8 was therefore the avantgarde and a laboratory of art whose task was to test the bunker as a potential exhibition space, i.e. museum, art gallery…

THE BUNKER IN PL. STRZEGOMSKI IN WROCŁAW
The bunker in pl. Strzegomski, built in 1942 as one of several air-raid shelters for civilians, had been designed by a controversial Wrocław architect Richard Konwiarz, who had also co-authored (with Max Berg and Ludwig Moshamer) the plan of redevelopment of Wrocław in the years 1919-1920. The cylindrical free-standing building has 1.1-meter-thick walls of reinforced concrete and 1.5-meter-thick floors; its height is 25 meters. Initially, there were two entrances in the shelter rysalit on the west side, preceded by a five-axe portico (currently walled off), whereas the panel was ornamented by a silhouette of an eagle with a swastika. During the siege of Festung Breslau, the bunker functioned as the fortress hospital number 2 (Festunglazaret II), and then a pocket of resistance.

Ground air-raid shelters in Wrocław were first built in the years 1940-42, a time when the German army controlled almost the entire territory of Europe, and the only threat for German cities were air raids of the allied air forces. The military role of these shelters was poor since they could protect too few citizens, but they improved people’s morale considerably. In 1945, during the offensive of the Red Army, they were strong pockets of resistance, protecting the crew inside both against air raids and artillery fire.

The shelter is in good condition. It avoided significant damage both during the fight in Festung Breslau and during more than 60 years of exploitation afterwards, when it served as a warehouse; in the 1990s, it housed various shops and wholesale outlets.

ARCHITECTURE AND CRIME
The key phrase of SURVIVAL 8, ‘Architecture as a Crime Scene’, was coined when we were still unsure whether we would manage to organise another edition of the review. When considering various solutions to the difficult financial situation (which is actually typical for the so-called ‘third sector’ in Poland and could only partially be explained by the economic crisis), we came up with an idea of carrying out a fully ‘conceptual’ review. Using minimum financial means, we would create an exhibition of ‘impossible’ art, i.e. artistic projects which would remain entirely in the sphere of thought (and on paper) because in the current situation it is impossible to build them. That is how we understood the title crime – as an act of omission and an unwillingness to change. And it was not only about SURVIVAL, but the sphere of culture in Poland in general – lack of understanding (its alleged hermeticity – without supporting the initiatives which overcome this hermeticity), promotion, financing (within a method called ‘grant-art’ and without clearly formulated tools to verify its quality), reception (through a medially-promoted belief about wasting public money). These issues were presented to the visitors by Kuba Szreder in his text accompanying the eighth edition of the Review and further discussed during debates with the participation of, among others, Mr Jarosław Obremski, deputy mayor of Wrocław, and the curators of SURVIVAL.

The phrase ‘Architecture as a Crime Scene’ was also meant to serve as an introduction at a purely artistic level – binding the artistic realisations into a coherent unity and adding a thread of continuous narration in the exhibition. Architecture is a peculiar repository of history. The bunker hides an undefined terror and seems to still remember stories of wartime plight of the inhabitants and their psychological dimension. Holding the Review in such a unique place, which used to be a substitute of a safe refuge in the wartime, prompts artistic references to a whole reservoir of notions connected with the subject of degradation, falling into oblivion, but also transformation, rebuilding and giving hope. Under the term ‘architecture’ was included a reference to the Strzegomski Bunker itself (its complicated, maze-like structure), to SURVIVAL as a whole (the traditional map of the Review and the connection between a work of art which is being ‘exhibited’ and the venue) and to historical transformations of the city, its destruction and rebuilding. Architecture is a witness to crime, and crime is being committed in architecture and on architecture. Moreover, crime has its own structure and logic – its own architecture. What is unattainable, impossible and (un)imaginable may be encapsulated in this logic.

WAS, IS, WILL BE
The audience that participates in the Review is growing in number rapidly. We have not conducted any surveys on our audience’s expectations and state of mind but we see them change with each edition. Although SURVIVAL is organised in the public space, which is obviously a zone where the private struggles with the common, we are not ‘doomed’ to accidental passers-by. Our audience consists of people who not only want to learn about modern art, but are also willing to develop, experience themselves and meet with others – who are also searching. This audience has their reasons – of which they might be aware or not – to come to SURVIVAL. The formula of the Review seems to meet their needs and emotions.

SURVIVAL is a niche phenomenon within a niche world of Polish contemporary art. It is a result of innovation which requires from the viewers to be open to the unknown and involves their perception in a way rarely accepted until recently – based on making use of many senses simultaneously, of intuition and premonitions. The curators’ intention is not to make the visitors feel good – to the contrary, they may leave the venue feeling intellectually defeated. We believe that art should be important, meaningful and challenging for a person who wishes to make an effort to read and interpret a work of art – even at a price of discomfort. What counts is individual experience.

For years, SURVIVAL has been supporting the process of creating a modern recipient of art who undergoes a change from a passive participant to an active coauthor and co-creator, whose opinions and experience are in turn taken into consideration by artists and curators. In this context the Review and its assumptions enter into a discussion concerning the future of numerous museums of modern art which are being opened in Poland at the moment. The programmes of these institutions are built on the knowledge that contemporary art, often immaterial and volatile, and also eccentric and uncompromising, is largely rejected by the society, whereas the traditional methods of evaluating and perceiving art are still very strong and durable. The attempts to diversify programme offers of these institutions and to enter the public space seem to be the answer to an ever-louder question: isn’t a classical museum too often perceived as a building?

SURVIVAL is a mobile art platform which contradicts a common belief that institutions are the only intermediary between artists and the public. SURVIVAL’s mission is to use the potential of direct interaction between the audience and art and artists in order to inspire and talk about ideas, shape critical and creative ways of thinking, encourage individual search and reflections. SURVIVAL may thus contribute to making a kind of ‘culture leap’ which would include many social groups.

Beyond doubt, one of the functions of contemporary art is to modernise life. There has even been a conception of a city as a social work of art. Those who promote the idea of city art and city art creation, as described by Ewa Rewers, are not ‘troublesome applicants with a claiming attitude’ who want to take public money but rather contemporary pioneers who perceive this idea as a sine qua non for economic development of the city. For art is the basis of culture capital which influences the quality of social capital (the influx of creative and financial classes tempted by a rich cultural offer) and finally changes into economic capital.

The pessimistic view that authentic art which reaches the depths of life is not needed in the times which have generated a cult of effectiveness and work (which is additionally increased by a perspective of huge earnings), is no longer current. SURVIVAL, which repeats its cycle in different venues, always open to new ideas and held in inspiring, full-of-meanings urban spaces, can only accelerate this change.