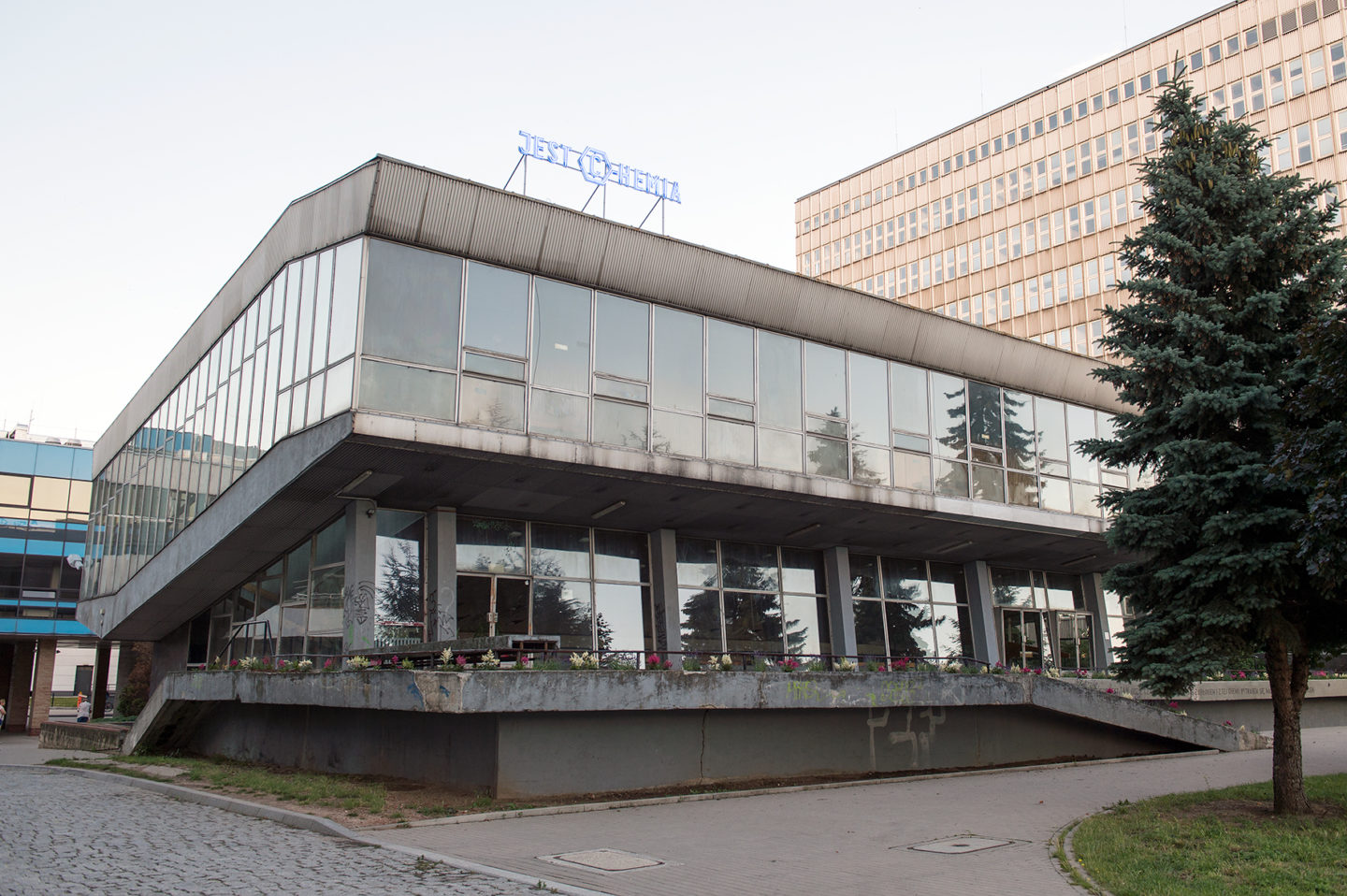 Bidula, a character appearing in the Old Gentlemen’s Cabaret, could serve as a personification of the situation in which architectural objects of the post-war modernism ended up after 1989. 11 Ingénues. Episode xv of the Old Gentlemen’s Cabaret, originally aired on 11 December, 1965, here: a fragment between the 8th and 10th minute of the programme. As Kuszelas, an organiser of artistic performances, explains, Bidula is the complex of the most attractive female elements that he has ever come across. Asked by one of the Older Gentlemen whether Bidula has ever played a major role, Kuszelas replies that so far not because she has not been promoted enough, but he will do it and Bidula will be a star. Cf.: Bidula, Kuszelas [entries in:] R. Dziewoński, M. Wasowska, G. Wasowski, Ostatni naiwni. Leksykon Kabaretu Starszych Panów, Warsaw, 2005, p. 28, 98. ↩︎

Too often, to paraphrase Kuszelas, the complex of the most architecturally attractive elements that you could ever come across in one place would be demolished or significantly altered simply due to the lack of promotion. The 1990s took a particularly heavy toll. As Max Cegielski rightly observed:

Starving for the shiny trinkets of capitalism, having just survived the sad days of the martial law, we dreamed of a feast, paying little attention to demolition and destruction. Today’s guardians of the past were still in kindergartens, so history ended up on the waste heap without a second thought. 22 Cegielski, Mozaika. Śladami Rechowiczów, Warsaw, 2011, p. 28. ↩︎

Art historians and architects who have been promoting the post-war modernism for the last two decades were still in kindergarten, too.

The history of architecture provides examples of time periods when certain artistic phenomena, such as the architecture of Historism, were deprecated. As recently as 1960 one of guidebooks to Wrocław read:

We got off the train at the Central Railway Station [all highlights by the author] in Wrocław. It is one of the largest and oldest train stations in Poland. Built in the mid-19th century in a style posing as English Gothic, the edifice is far from beautiful, although its appearance definitely improved after a renovation. Rebuilt from war damage in 1950, in 1959 it underwent modern cosmetic work. The artist’s hand masked the ugliness of the construction and equipped the interiors with colourful plastics, glass and light. Today the inhabitants of Wrocław take pride in their railway station, whose aesthetics, cleanness and amenity […] delights all visitors. 33 Przewodnik po Wrocławiu. First edition, edited by M. Markowski, Wrocław, 1960, p. 41. ↩︎

This persistently negative attitude to 19th-century architecture translated into the disappearance of numerous objects. The abovementioned Central Railway Station, which few would today describe as “far from beautiful”, in 1966 was entered into the register of monuments 44 Entered into the register of monuments under no. A/2782/248 of 21.06.1966. ↩︎ for fear of being gradually torn down by the Polish State Railways authorities. Thus researchers’ lack of interest, or even their conspicuous disdain for the station, caused irreversible losses.

Against such backdrop the history of the Chemistry Auditorium of the University of Wrocław is the proverbial blessing in disguise. Because the building resisted renovation and modernisation, it retained a state close to the original. On the other hand, its function and the technical condition of the installations result in the fact that the Auditorium is not used by the current owner. 55 In fact, it is used as a repository of unnecessary equipment. ↩︎ What is more, in 2012 it was entered into the register of monuments, which limits the owner’s freedom and opens up the road to subsidised renovation. 66 Entered into the register of monuments under no. A/5833 of 11.06.2012. ↩︎

It all began with the university hospital, which has become today’s Medical University, and the Higher Technical School – today’s University of Technology. The second world war left a deep mark on this area – the existing urban fabric was levelled in order to build a makeshift runway. As a result, the Polish newcomers after the war associated the vast open space with the fields of Grunwald, the site of a victorious battle with Teutonic knights in 1410. Apart from the new name plans were made to develop the area with the proper architectural tissue. Since the social realist plans to erect a counterpart of Warsaw’s Palace of Science and Culture came to nothing, the idea to build an academic quarter rose like a phoenix from the ashes.

In 1964 the Association of Polish Architects held a competition for the architectural development and urban plan of Grunwaldzki Square. The site was a vast area which was to become the showpiece of the young Wrocław. The intended academic quarter was supposed to testify to the dynamic growth of the city, which took pride in the booming industrial production as well as the thriving academic milieu. Of course, the young Wrocław needed modern architecture. The proposal submitted by Krystyna and Marian Barski 88 See more in K. Ziental, Krystyna Postawka-Barska i Marian Barski, series: Wrocław Masters of Architecture, Association of Polish Architects – Wrocław Branch, Wrocław, 2016. ↩︎ addressed these expectations and consequently won the first prize.

The main axis of the urban plan was going to be modernised. Most importantly, the architects wanted to build a second Grunwaldzki Bridge and a system of flyovers that would improve road traffic.

The district would be surrounded by a green boulevard stretching along the river from Pokoju Bridge to Szczytnicki Bridge, which would ameliorate pedestrian traffic. The district was divided into four zones assigned to four higher education institutions: Wrocław University, the University of Technology, the Higher Agricultural School and the Medical University; it came complete with student houses and a varsity centre. The Rondo, a centrally located social and cultural hub, would connect different parts of the quarter and dominate it. Against its background there would be three high-rise student houses of various heights. In front of them, near the centre of the plan, a two-storey building would link the point-access blocks with another three buildings with original bodies – two erected on the plan of a square with smooth corners and one in the form of two juxtaposed flattened cones. They were going to house an auditorium, a central canteen and a sports hall. The student house complex included two tower blocks (later known as Kredka and Ołówek) serving as a background to a swimming pool covered with a peculiar roof that contrasted with the towers.

The designed university buildings were grouped in more or less elaborate complexes of high- and low-rise structures, usually linked with one another following the principle of communicating tubes. The two largest complexes would belong to the University of Wrocław and the University of Technology, with a strongly pronounced student house district and a sociocultural centre.

The chosen plan was a monumental vision that accumulated all the functions of higher education institutions, designed on a grand scale and allowing for future expansion of the academic centre. The sparse development with ample provision of light and air, surrounded by green or empty recreational areas, would provide perfect conditions for studying and relaxing. The vision assumed that four higher education institutions would be situated along one street, together with a cultural centre and living quarters for students and their teachers. If the basic principles of the plan had been fulfilled, a special place would have emerged on the map of Wrocław.

Eventually nine buildings or architectural complexes included in the Barskis’ plan for an academic quarter near Grunwaldzki Square were constructed. In the area allocated for the University of Wrocław, the seats of the Faculty of Mathematics and the Faculty of Chemistry were built at the turn of the 1960s and 1970s. The construction had been preceded by consideration of different variants – from a futuristic one, in the spirit of Oscar Niemeyer, in which the auditorium was given the form of a flying saucer, to a more disciplined solution, which endowed the building with a dynamic form, to the final one, in which the auditorium’s body resembled its actual outline.

Erected between 1968 and 1972, the Chemistry Auditorium constitutes an element of an architectural complex in which all the three buildings making up the seat of the faculty are connected. 99 Full description in: K. Ziental, The Auditorium of the Faculty of Chemistry of the University of Wrocław, architecture and construction monuments record sheet, Wrocław, 2009, typescript at the Archive of the Office of the City Historic Preservation Officer of the Municipality of Wrocław. ↩︎

They are characterised by the typically modernist contrast between the bodies of the buildings: the ten-storey object performing scientific and educational functions towers over the three-storey horizontal building of the laboratory and the two-storey auditorium. These constructions determine the character of the site as an enclosed urban area. The contrast in scale is further emphasised by the facing of the elevations. As the designers intended, the matt grey aluminium is juxtaposed with the shiny, transparent glass and blue translucent tempered glass. The colours of the Auditorium, limited to a scale of grey and contrasting black and white, closely correspond with similar colours used on the elevations of the adjacent edifices. The original form of the Auditorium results from the outline of the lecture hall in the shape of an amphitheatre, and therefore follows its function. As originally intended, this would be the gate leading to the premises of the Faculty of Chemistry as well as a place where students spent most of their time, in lectures as well as during the breaks.

The interior of the Auditorium is probably the only surviving original interior from the turn of the 1960s and 1970s in Wrocław, perhaps in Lower Silesia, or even on a greater scale. It was custom designed with attention to the overall visual impression as well as each and every detail – the furniture, handrails, lighting etc. Its distinctive feature is the consistent use of a diverse albeit limited scale of materials: stone (granite and marble), terracotta, concrete (including terrazzo), wood and aluminium. On the ground floor there is a spacious light hall with granite floor, whose ceiling is covered with strips of pinewood with the characteristic arrangement of light spots embedded in rectangular niches. On a podium there is a flowerbed faced with cream-coloured terrazzo. Below there used to be a cloakroom marked off by a counter covered with red leatherette. The hangers were designed in such a way that they simultaneously served the role of seats. Vertical traffic inside the building followed ramps that were originally intended to offer the view of the surroundings – the green embankment of the Odra and the river itself. Apart from the custom-made openwork handrail and a plastered surface contrasted with the glazed walls, the designers paid much attention to the lighting system.

The floor of the upstairs corridor was tiled with black and white terracotta forming a chequered pattern while its walls were covered with strips of wood correcting the uneven surface underneath. The original décor included benches along the glazed wall, which were connected with a backrest that gradually morphed into a flowerbed. The lecture theatre boasts custom-made interiors whose constituent elements were meticulously designed by the Barskis. The floors are covered with blue springy material, the walls – with square wooden offset panels, and above it all there is a suspended ceiling made from aluminium light prisms. The rooms are also equipped with wooden desktops, strapontins (folding seats) and a table for experiments. Surprisingly, even the illuminated – multimedia, one could say – periodic table of elements still survives.

The Chemistry Auditorium of the University of Wrocław is a well preserved – and hence unique – space, stylistically and aesthetically uniform. Its condition as well as artistic and historical value constituted the basis for entering the forty-year-old structure into the register of monuments. It could be said that this decision officially confirmed that the Auditorium constitutes a complex of highly attractive architectural elements. Now let us hope that Poland’s youngest monument has gained enough recognition to resist decision-makers’ bad taste, architects’ desire to modernise and conservators’ creativity, so that it could testify to an epoch in which it was conceived. 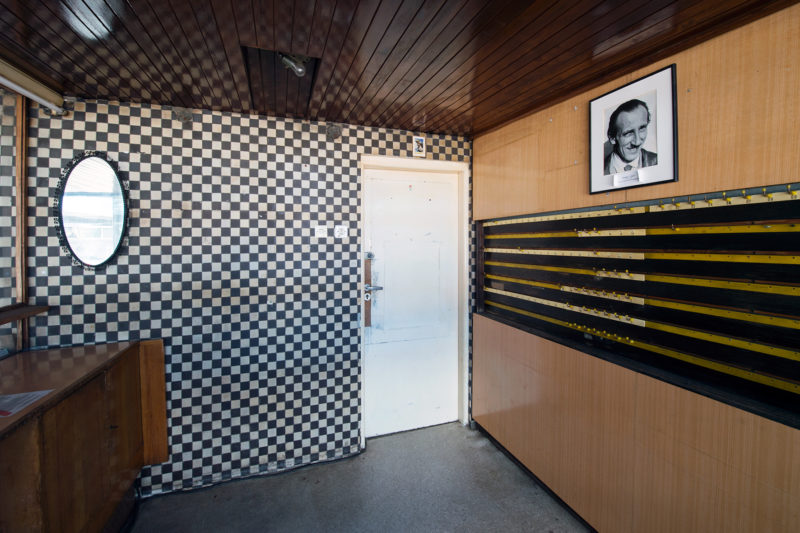 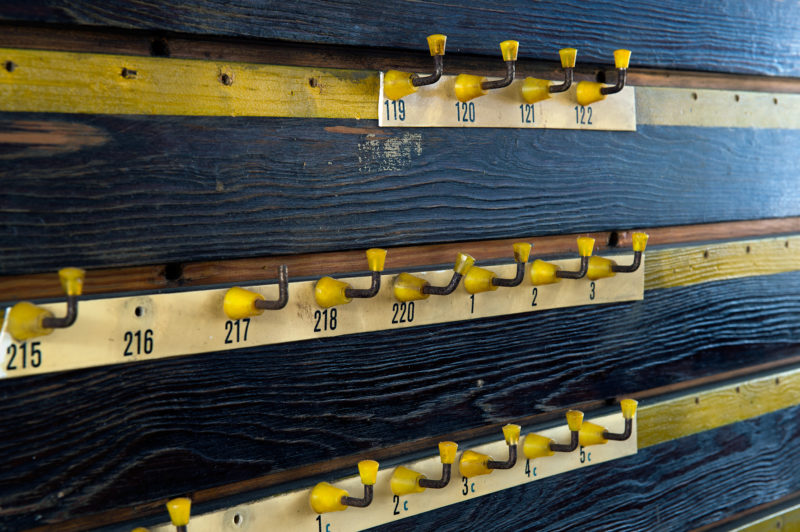 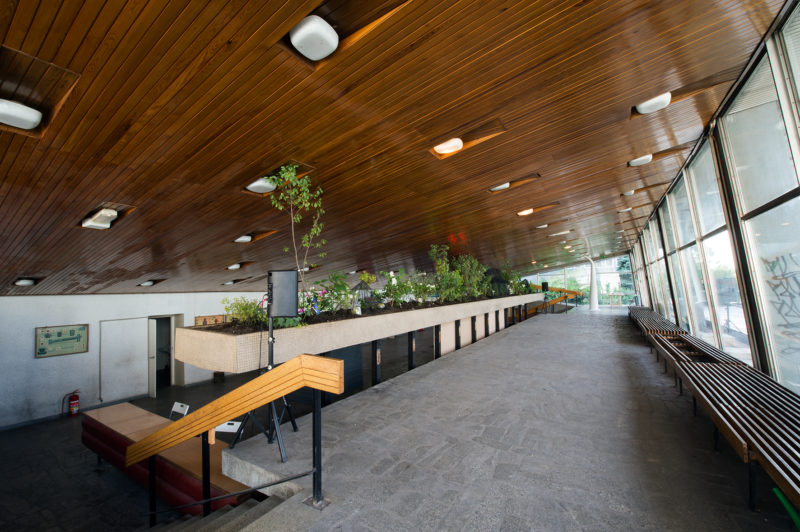 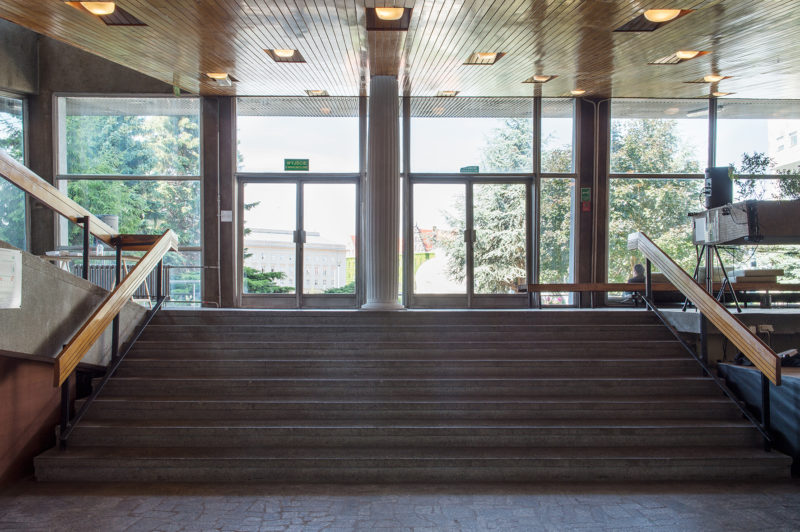 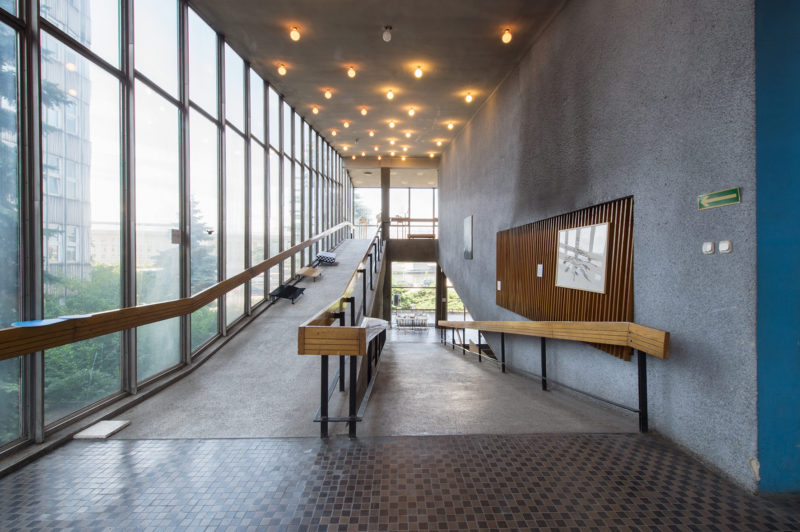 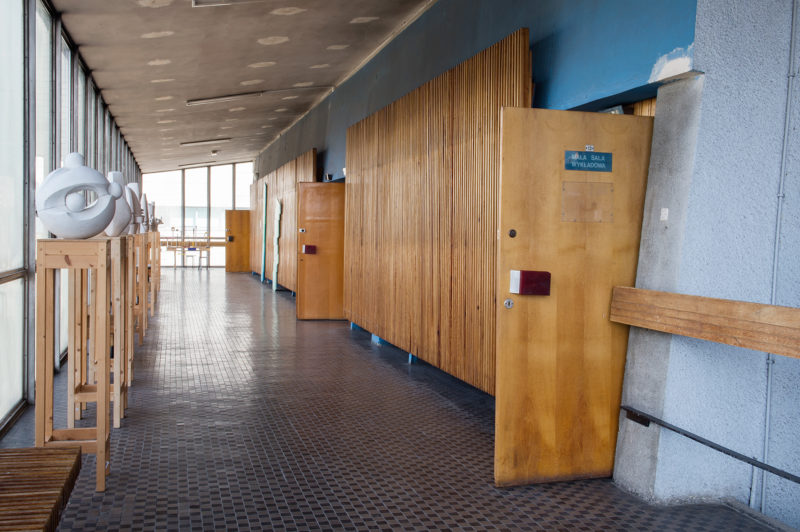 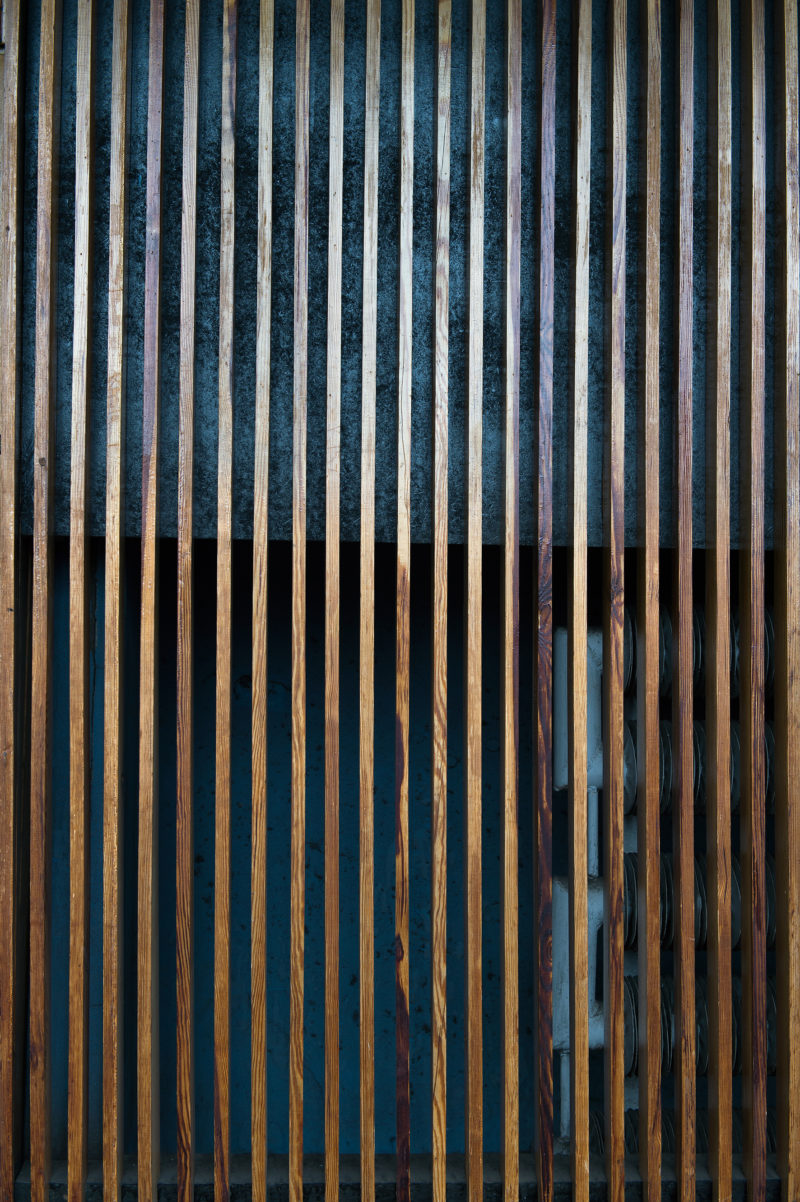 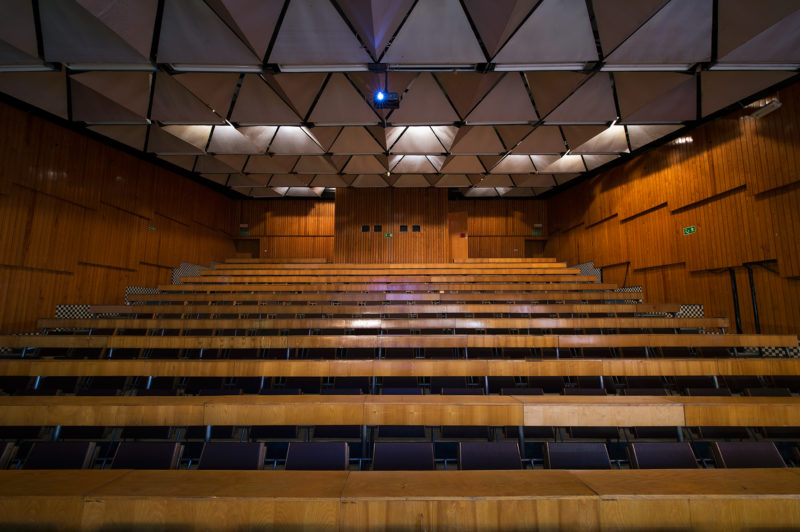 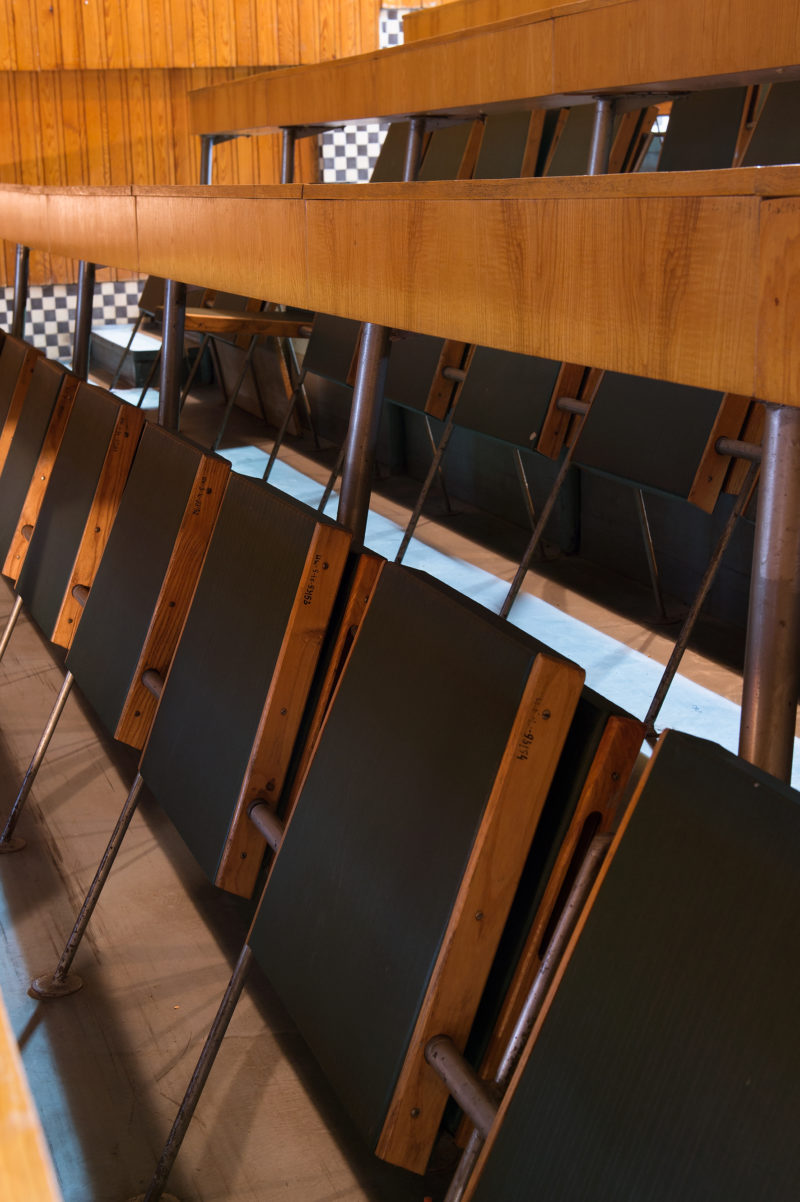 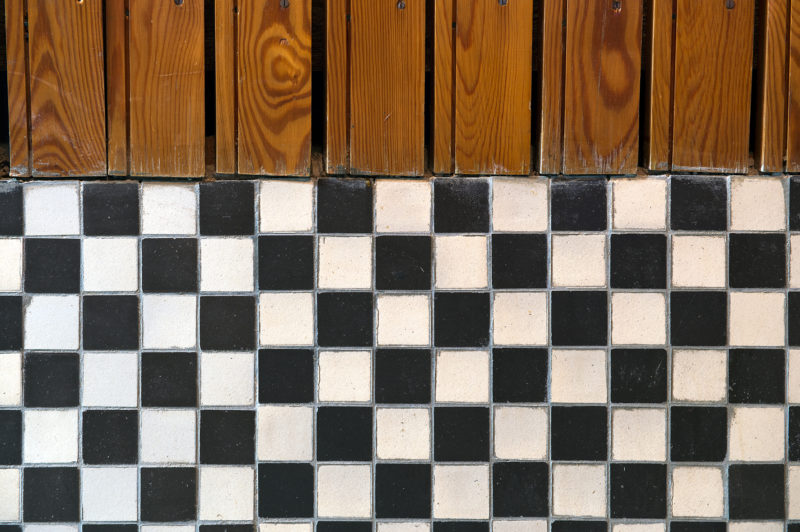 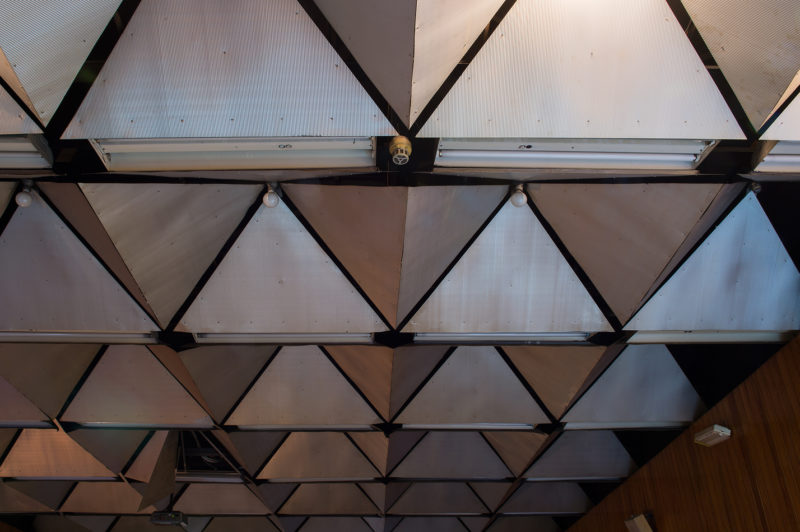 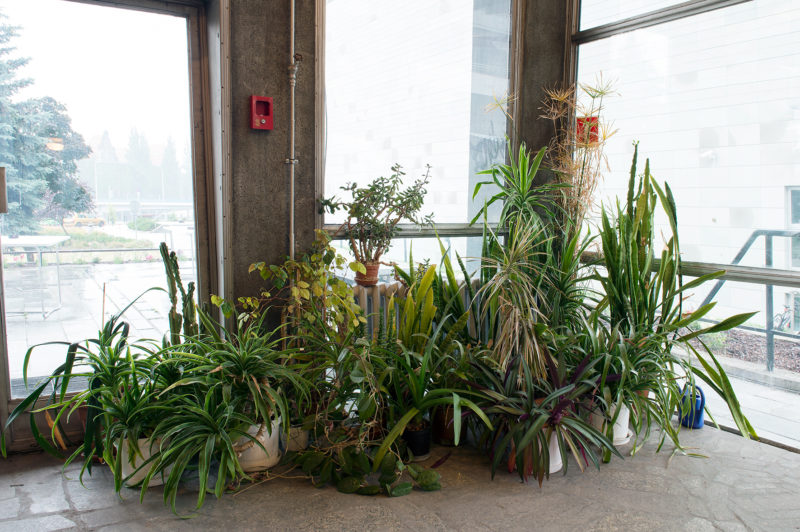