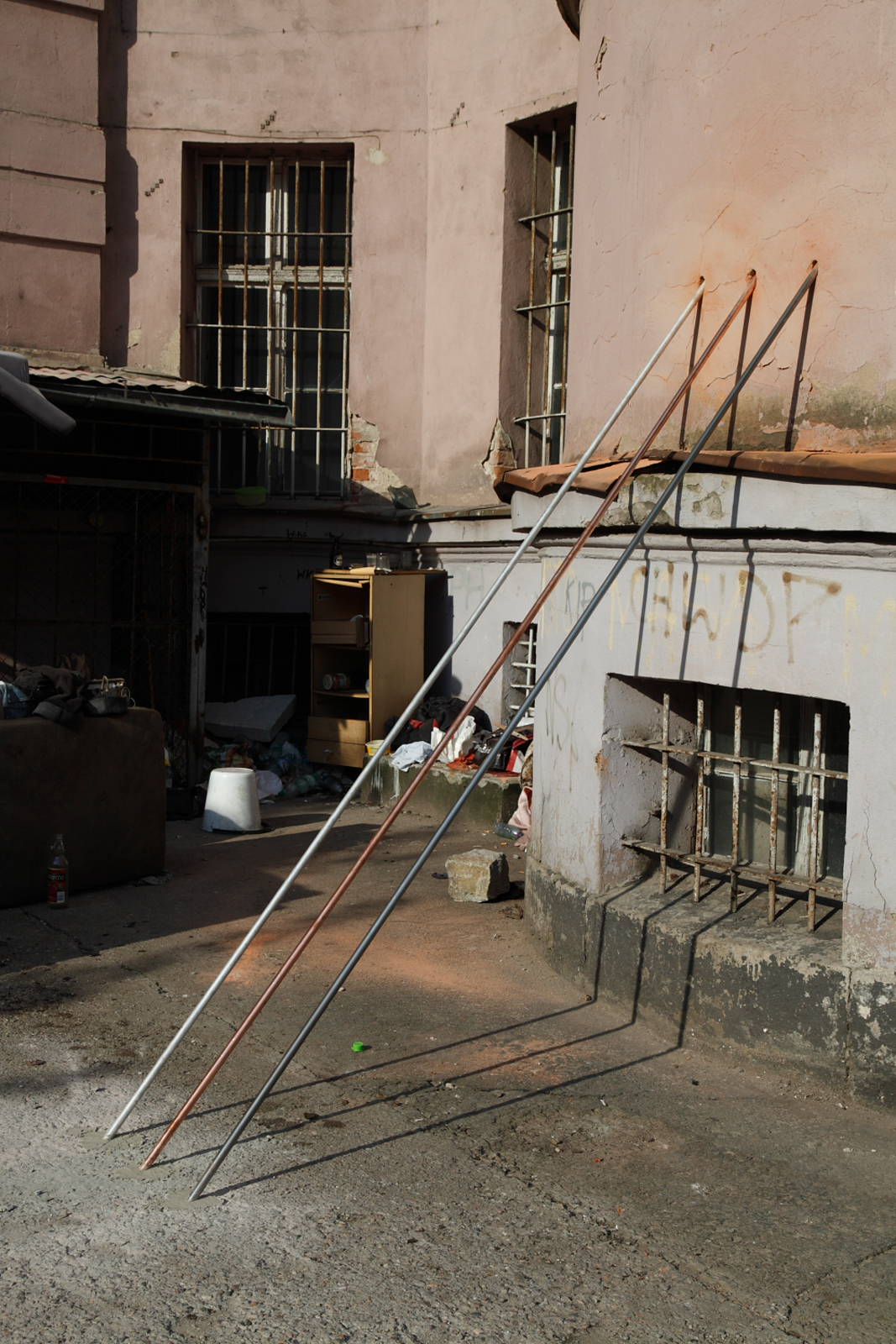 Since the middle ages, it has been said that urban air makes you free. This freedom has manifested itself in many ways. It could be economic freedom, i.e. independence from feudal lords and the possibility of conducting trade and developing economically. Venice, Amsterdam and London became symbols of the spreading capitalism. A city has also meant political freedom; a polis was an independent community of self-determining citizens. Thus, a city promises democracy – it is a new and better way of exercising power. Metropolises also offer freedom from natural necessities and provide a space for the creative spirit. Finally, a city is a space of individual freedom, of shaping one’s own unique and unrepeatable personality. An ‘urban lifestyle’, living in constant rush amongst the hubbub of crowded streets, has become a desirable synonym of civilized life.

However, urban air is starting to suffocate us, in its most literal sense. Cities are becoming sick; they symbolise various illnesses plaguing the contemporary culture and civilization. Although since its inception the SURVIVAL Art Review has been an ‘urban’ festival, its 12th edition particularly emphasised the condition of contemporary metropolises. Unlike those who perceive the city as a collection of buildings, as a more or less intelligent mechanism, the organisers favoured an organic approach. This metaphor highlighted the complexity and mutual interdependence of urban structures and processes. This text is an account of the most crucial problems of contemporary poleis, which are burning up with hidden inflammation and are being devoured by illnesses, but which are also places of creative tumult which can provide us with ways to save the city.

As specialists observed, the 1999 administrative reform was one of the greatest achievements of Polish transformation after 1989. Not much has been left of its spirit until now. Its fundamental assumption was a belief that the local government should not be an extension of the central authorities, but an independent means of making decisions by citizens about themselves. However, 25 years after the transformation it is evident that local authorities have veered away from this model. Undismissable mayors who are in office for many terms, local MPs who are only “voting machines”, lack of transparency when taking decisions or dependence on national politics – these are just a few examples of how local governments have alienated themselves from the local context. The arrogance of the authorities easily translates into a growing mistrust of the citizens, and the turnout for local elections is systematically declining. Urban democracy is ailing, and questions about who the city belongs to are resonating ever more loudly.

Questions about the right to the city are posed mainly by urban movements. In recent years, groups of city activists have transformed their focus on individual elements of the urban jigsaw puzzle into an ever better organised movement that distances itself from the local politics. Activists from different cities are beginning to organise themselves, create joint manifestoes and programmes, and some of them have even ventured into ‘serious’ politics. During the debates that we held, we tried to diagnose the dynamics of the ongoing processes. This triggered one of the key disputes – between engagement and professionalisation. Young activists enthusiastically talked about their plans and ideals while the older ones emphasised budgetary considerations and the necessity to know legal regulations. Although some of these reservations stemmed from a desire to preserve the status quo, others definitely called for a deeper reflection. Time will tell whether urban movements will manage to rejuvenate Polish cities, or whether they will be absorbed by ‘professional’ politics.

Another reason why urban air is suffocating is that there are fewer and fewer public spaces where communal ethos could develop – which is a sine qua non for a living democracy. Having been neglected for many years, urban spaces are becoming degenerate and unaesthetic. Green areas are being appropriated by shopping centres; places for meetings, joint actions or simply fun are disappearing. The logic of capital accumulation is dominant. Another challenge for cities is transport. The dominating model of individual commuting is inefficient and contributes significantly to social disintegration. The number of vehicles per capita is higher in Poland than in our western neighbours.
What follows is the slow and unattractive public transport system. Taking to bicycles could save cities, but cycle lanes, although significantly increasing in length, often suddenly stop. The implementation of urban renewal programmes frequently leads to gentrification. While renovating the facades of tenement houses, their tenants are often forgotten. Housing estates turn into ghettoes that make any real meeting impossible. Multilane streets cause divisions instead of bringing people together. One of such divisions is the division into wellkept city centres and forgotten peripheries. The former, being a product of mass tourism, are not designed for city dwellers, and there is no reason to visit the latter. Another disease of public space is its ugliness. It is highly surprising that it had not been until Filip Springer’s most recent books when we learned to notice it. The crisis of public space makes it increasingly difficult to identify not only with one’s city, but even a district or street. The demolition of old buildings or changing their function do not act favourably on citizens’ attachment to their places of living. Among the visitors to this year’s SURVIVAL, there were many people who came to the Faculty of Pharmacy building intrigued by this mysterious venue, but also worried that it might disappear from the cityscape.

The modern world is increasingly urbanised. The percentage of city dwellers has exceed 50% and shows no signs of slowing down. However, perceiving this process as an advancement of modernisation is incorrect. Cities have become the destination for innumerable masses of migrants, who are looking for a better job and a better life. But cities are unable to offer their riches to everybody. As a result, the world is turning into a “planet of slums”, to borrow from Mike Davies. This paradox of urbanisation does not refer only to remote countries, which we patronisingly term ‘the Third World.’ Camps and poor districts are also noticeable in Polish cities. Rapid urbanisation has a dark side, too. Cities, just like black holes, suck in financial and human capital. Thus they pose a threat to all that which is not a city. It has prompted some to postulate a right to the countryside alongside a right to the city.

What used to differentiate an urban lifestyle was individual freedom, a possibility to assume multiple roles, and anonymity. However, the culture of freedom has been substituted by the culture of fear and surveillance. Each movement that we perform is recorded by hundreds of CCTV cameras; each choice that we make is registered in various databases. We have made ourselves believe that in the name of security we must give up our freedom and subject ourselves to control by various services, which we are increasingly more unable to control as a society. In spite of ever more perfect systems of protection, we still feel anxious, and the surveillance system is tighter and tighter. Paradoxically, the ubiquitous monitoring does not decrease real risks – it only decreases our feeling of responsibility. The architecture that surrounds us is also turning into a prison architecture. The walls and fences around us are higher and higher. A unique feature of Polish cities is a large number of gated communities – a dream of the middle class. Driven by fear, we do our best to separate ourselves from other people and their problems. Nowadays, efforts are being made to restore these severed neighbourly bonds by organising various communal activities that are intended to prompt the inhabitants to act together. Many of them, however, are highly local events or festivals that are unable to deliver lasting effects. Community participation, which was supposed to be an antidote to many problems, is turning into a curse, yet another formal requirement that must be fulfilled.

Is it thus true that the only hope is escaping from the city? Is urban sprawl inevitable? Undoubtedly, reclaiming the city is not an easy process. Human habits and economic interests cannot be changed overnight. Unfortunately, the status quo is profitable for too many people, and the awareness of problems and their reasons is still insufficient. On the other hand, the fall of cities is not an unavoidable process but a result of many choices. What we need is real actions of activists, revitalization of public spaces and resuscitation of local communities. Banal though it may sound, culture is one of the tools against exclusion while art is one of the ways to make cities a better place to live. In accordance with the slogan of Wrocław’s programme of European Capital of Culture, it is important to create spaces for beauty. The SURVIVAL Art Review made it possible to create such a space for a few days and reclaim it for artistic and social activity. We managed to survive in the city. The next step is to live in the city.