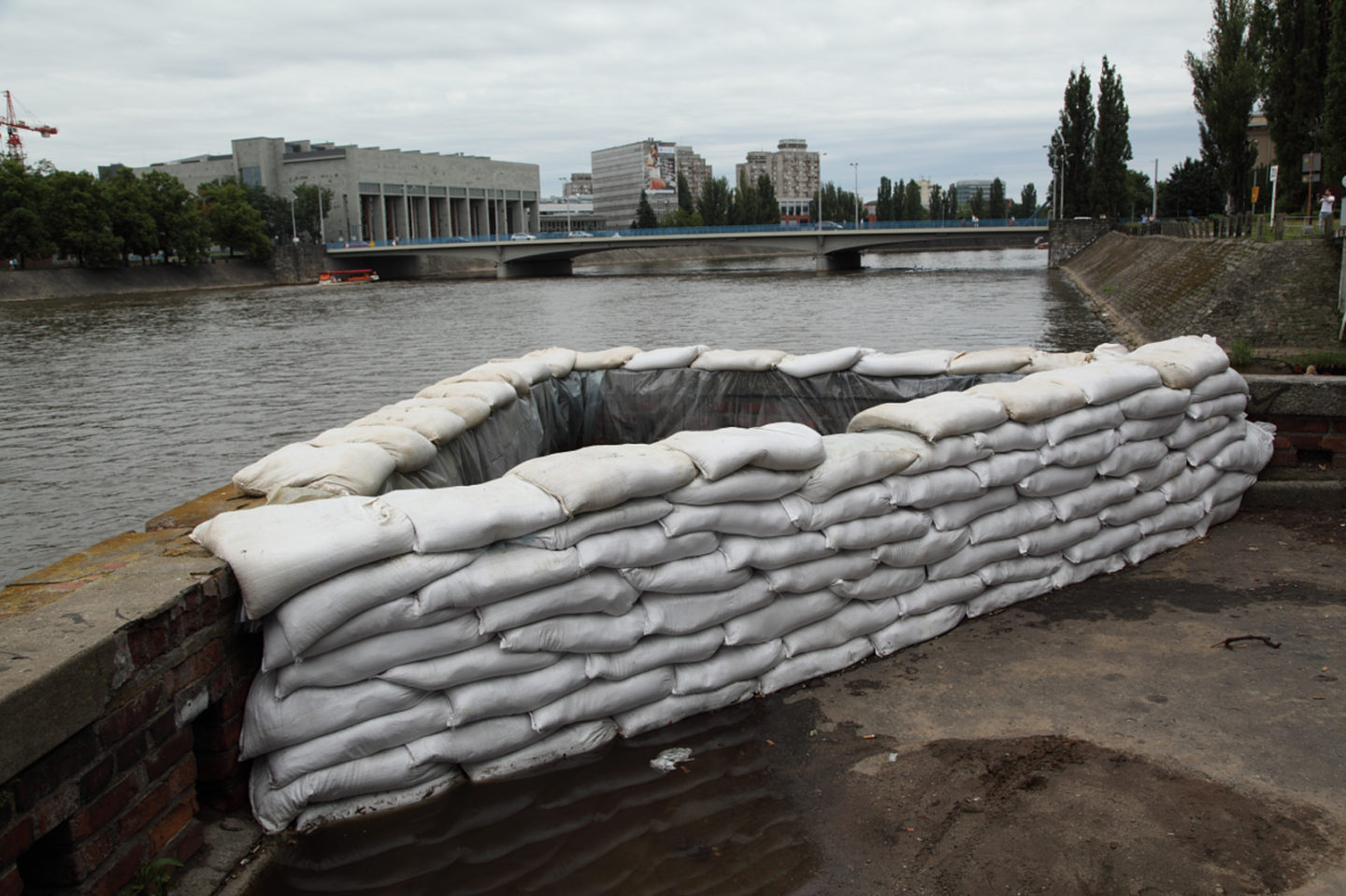 ‘We’re Sailing!’ – it is a seemingly optimistic and spontaneous motto. The cheerful call, in spite of its lightheartedness, has also a heavier dimension, concerning the unpredictability of a situation which requires analysing weak and strong points as well as taking into account the possibility of a failure and all its consequences. It takes a lot of courage, smartness and determination to sail into the unknown.

One may swim with the current of a river, under full sail, choosing an azimuth or, not having one, simply sail ahead. This situation may describe not only a way of acting in which there is a certain potentiality, an unknown, but it may refer to the very state of aggravation. A flowing liquid is characterised by a lack of solidity, by changeability and constant movement. On the one hand, the shapelessness of a liquid determines its nondescriptiveness and intangibility, on the other – it is a source of huge advantage and adaptability. A liquid may assume the exact shape of any vessel which contains it. Unlike solid objects, a liquid avoids obstacles, flows over them, dissolves or absorbs them. It is no easy task to harness a liquid, with all its spontaneity and dynamism. In this sense, ‘We’re Sailing!’ may be understood as a declaration of strength, impetus, heading towards a direction which is not always easy to guess.

Culture is a space of sublimation, of transitioning libidinal energy into creative action. No wonder then that this sphere of human activity has long been associated with the spirit, ascension, a desire to raise above the binding and restricting materiality. Rationality, manifested by the solid state, and the pragmatics of everyday life are such a burden that it has become natural desire to try to overcome the tyranny of the material. For that reason, human activity in the sphere of culture resembled the gaseous state of aggravation until recently. The process of transition from the solid to the gaseous has long ignored the liquid state.

The famous phrase ‘melting the solids’, coined a century and a half ago by the authors of The Communist Manifesto, referred to the treatment which the self-confident and exuberant modern spirit awarded the society it found much too stagnant for its taste and much too resistant to shift and mould for its ambitions 11 Zygmunt Bauman, Liquid Modernity, Cambridge: Polity Press 2000, p. 3 ↩︎. Reality should be emancipated from the ‘dead hand’ of its history, which could be achieved by melting the solids – that was the modern thought. Bauman emphasises the moment when Modernity changes its state to liquid, fluid. He uses the term ‘liquefaction’ to describe a process in which the utopian ideas of Modernity were confronted with the impossibility of their implementation. This change pertains to all spheres of human activity – including culture.

Contemporary culture fluctuates between and merges disciplines, which used to emphasise their distinctiveness so much and fight for their autonomy. It is hard to imagine contemporary art devoid of this interdisciplinary touch; artworks increasingly resemble research projects, actions from the field of social animation, while artistic strategies are based on the principle of recycling and draw on science and philosophy. The phenomenon of postproduction, which characterises Postmodernity as Nicolas Bourriaud described it, is based on liquid practices – remixing and capturing – which merge not only the media, but most of all undermine the issue of ownership of a work which is later used by another creator.

The author of Liquid Modernity describes the assembly hall of the Town Hall in Leeds, whose walls are covered with precepts guiding the society at that time – “principles of the self-assured and self-assertive bourgeois ethics” 22 Ibid., p. 130. ↩︎. Among those glorifying hard work, honesty, law and order, there is one spelled out in gold and purple letters: ‘Forward!’. The spontaneous call, which nowadays sounds somewhat unclear, used to denote a firm belief in the idea of moving forward. This advancement was all but unplanned; ‘forward’ was the destination, labour was the vehicle. Progress was not a linear process over a period of time caused solely by history. It was brought about by its creators, the society of that time. There was only one dimension of history, which was being created ‘here and now’ by the Leeds bourgeoisie. ‘Forward!’ sounds like ‘We’re Sailing!’, but there is an important difference. While the former implies the modern citizens’ belief in their power over matter, the latter resembles a sailor’s whim, nowhere near as firm a conviction of one’s strength as the previous one. Those who march forward have no obstacles on their way, while those who sail may never be sure of their situation – their movement depends on the unpredictable element.

One of Bauman’s favourite comparisons is likening contemporary culture to a plane whose pilot’s cabin is empty 33 Ibid., p. 59. ↩︎. The passengers, blissfully unaware during their travel, suddenly discover to their horror that there is no-one in charge. The only doubt of the passengers at the time of Modernity may have concerned the choice of the captain – the preconceived idea guiding them towards a clearly defined destination. Nowadays, the uncertainty is triggered both by the lack of the pilot and destination. The metaphor has its obverse and its reverse. A negative aspect is the fact that we have accepted a never-ending life of wandering; if there is no clear destination, all we can do is ‘sail’. There is an individualistic thread in the metaphor – since there is no pilot, anyone can have a go at flying the plane. The lack of destination may either make the whole trip pointless or – on the contrary – turn out to be liberating, removing the need to constantly move forward at all cost. Contemporary culture seems to be distrustful of captains who make false promises and avoids heading towards illusionary destinations. The liquid randomness of an unplanned trajectory makes contemporary culture resemble a drifting ship.

Apart from the poetic similes, there is another level of interpreting Bauman’s liquidity of culture, which concerns pragmatic aspects of living in the everyday. It is not just about observing the trends, directions, artists’ and recipients’ strategies; it determines the way of working in a culture devoid of any structure.

The crisis of culture is manifested by a lack of visible progress, of tangible effects of one’s work, and consequently – lack of belief in one’s own ability. One of the reasons for it is the lack of institutions. To quote Guy Debord, “The controlling centre has now become occult: never to be occupied by a known leader, or clear ideology.” 44 Ibid., p. 133. ↩︎ Obviously, there are entities calling themselves centres of culture that exist physically (the Ujazdowski Castle, Łaźnia, Kronika, Znaki Czasu), each of them with their own programme and aims (sometimes coincident, sometimes not). The effect – a fetish of contemporary culture – is the domain of evaluation, which is a widely respected method of determining efficiency in the sphere of culture. The value is evaluated only within a singular ‘own’ project, never within a holistic, joint strategy of several cultural entities. It stems from the fact that progress has been privatised – it is an individual effort, not a collective one. ‘Culture of projects’ is a teasing term used in the context of applying for grants, but it holds a certain truth about the organisation of work. Short-term projects are carried out independently, simultaneously, ideas are frequently copied. There are no long-term plans and objectives, both the employees and the decision-makers are hired for the duration of one edition.

The ethos of artistic work at the times of Modernity was connected with the magical power of shaping the shapeless. Obviously, the form could be abstract. Kandinsky gave meaning to a geometrical figure, Pollock – to a random stain of paint. Effort invested in work was connected with originality and personal execution. Work played a decisive role in the Modern process of influencing and taming the past. There was a widespread belief that the buyer and the seller of work are connected by an inextricable bond. Nowadays, intermediaries often arrange situations in which the buyer of a work of art never comes into contact with the artist. Production has little to do with originality; the ubiquitous sub-contracting results in separating the producers from their own products. Organisers of a large event outsource most of the work to sub-contractors, who are employed on a short-time basis, such as translators, authors of texts, graphic artists. Task-oriented work results in a lack of commitment and diffusion of common interest, which is connected with the most troublesome phenomenon in culture – procrastination.

“There is no deadline that can’t be extended”, half-jokingly repeat writers of texts about culture. Procrastination and postponing tasks in a project result in an ever-greater blurring in the process of evaluating whether the aim has been reached. There is nothing more frustrating than the postponement of the closing of an intended task. Bauman, however, perceives procrastination as a positive phenomenon. He interprets it as the result of actively influencing the order of events 55 Ibid., p. 157. ↩︎. As a cultural practice, it is connected with the delay of gratification, which is well exemplified by the figure of a pilgrim. A pilgrim’s journey loses its meaning upon the completion of its destiny – that is the reason why a pilgrim is always on the move. However, delaying the moment of gratification is connected with the modern ethos of work rather than with contemporary forms of employment. Procrastination used to refer to an ascetic postponement of satisfaction, celebration, harvesting the crops. Work was valued higher than consumption, which is the antithesis of the present situation, as illustrated by paying the commission to artists before they complete their work. In the society of producers, the ethical principle of procrastination ensured the durability of work; in the society of consumers, it is needed to secure the durability of desire. Satisfaction, however, cannot be postponed ad calendas graecas – it must be met from time to time. Since gratification spells the end of desire, and the end of desire equals stagnation, a contemporary society needs a very special kind of remedy, a pharmakon, the healing drug and a poison at the same time. Apportioned sparingly, it ensures the durability of the mechanism. The never-ending drift which accompanies working in culture may fulfil the role of Derrida’s drug. Dreaming of casting anchor moves away the moment of coming ashore. The end of travel would be both fulfilment and failure.