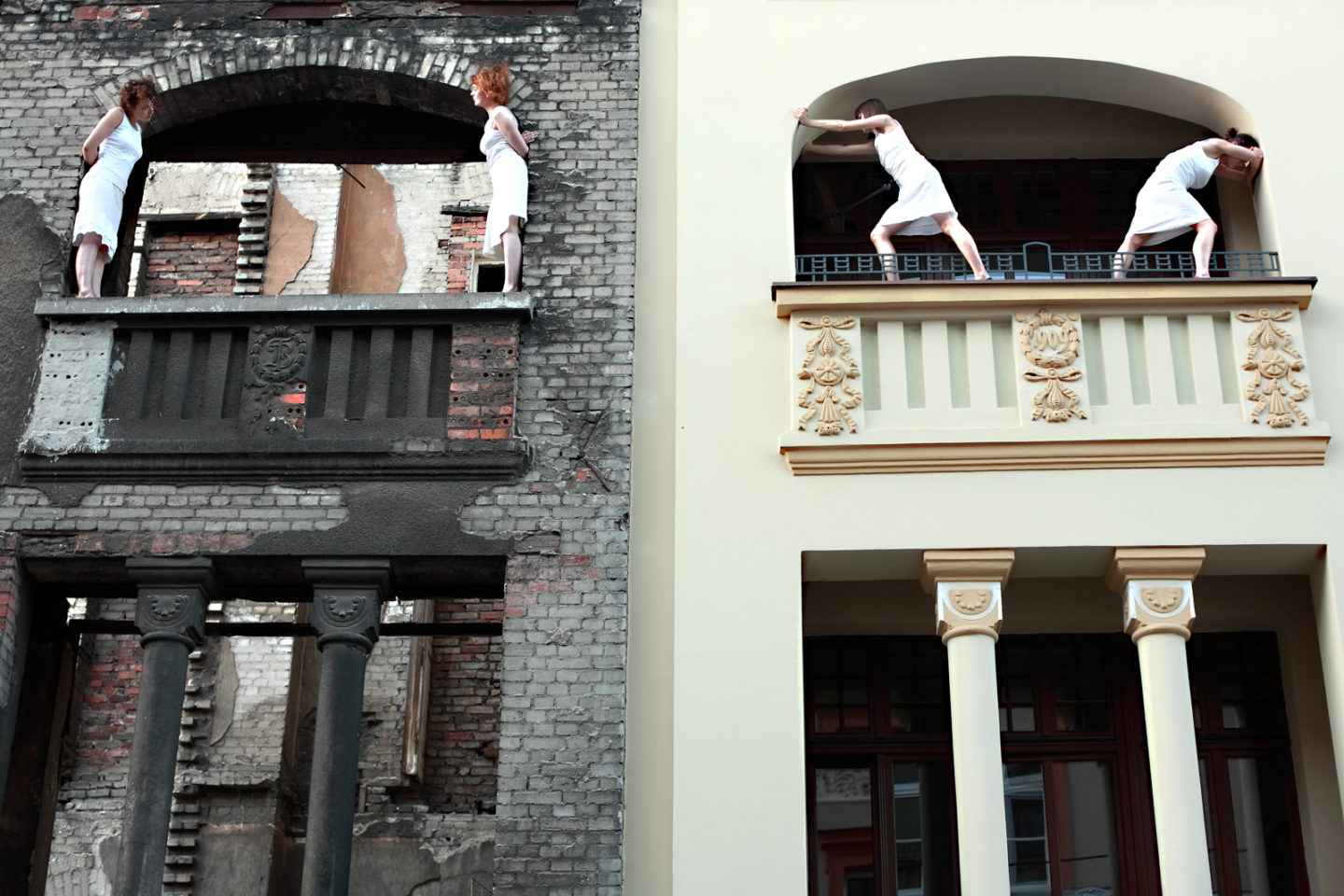 An urban area poses a big challenge for contemporary art. Moving artistic actions to squares or streets involves the risk of incomprehension or ignorance of a work of art by the people it tries to communicate with: passers-by. Therefore, if an artist attempts to communicate a precise message, e.g. by referring to a given place, its architecture, history, problems of the inhabitants, finally – the challenges it faces, he or she should be aware of the degree of difficulty of the task and the complexity of the entity, which is the city.

The changes which have taken place in cities in Poland since the beginning of political transformations of 1989 are yet to be described. The description should include the ongoing alterations of their appearance, their spatial expansion, changes of function of important places, appearing as well as shrinking of public spaces and migration of the inhabitants. Discovering and regenerating neglected areas is connected with the development of cities; the career of urban gentrification begins. Unearthing the history and multicultural roots, connected with the freedom to talk about what used to be left unsaid, can also be visible. An equally important part of the description should be devoted to the decision-makers’ understanding of their own roles and priorities; the competition of cities, which is most spectacular when comparing cultural events organised by them, is of utmost importance, too. The well-being of the inahbitants in the city is another important issue.

The tension between the common and the private seems to be fundamental for the changes in Poland after 1989. The notion of common good has disappeared from our systems of values. After the People’s Republic period, we have started to appreciate private property greatly. Hence the Poles’ lack of trust to each other, hence the emphasis on family, hence dividing Poland and putting up fences. As Magdalena Staniszkis put it accurately in her interview for ‘Gazeta Wyborcza’, after 1989 the notion of ‘common good’ has become unbelievable (19.07.2008). The common, the public is thought of as belonging to no-one. Consequently, we have to deal with people’s lack of understanding of the importance of places such as parks, squares, green areas, where strangers, who would otherwise never meet, have the chance to interact. Hence the flight of Polish city centres, which function as agoras, to shopping centres, which pretend to be of similar character, but in fact are closely controlled.

The changes in Polish cities have resulted in the following phenomena: chaotic housing; lack of urbanistic vision which would consolidate the city and show the way of its integrated development; malfunctioning of public transport; traffic congestion in the centre; too few parking areas; ubiquitous aggressive advertisements, especially in historical places, where they cover windows and dilapidated facades; few green areas; lack of recreation places. In fast-developing cities, where there was a building boom until recently, communal property is overexploited and every patch of land in fashionable, i.e. the most expensive, districts is built up. Malfunctioning cities are peopled with passive inhabitants who are unable to act to pressurise local politicians.
But apart from the dictatorship of investors and the shortsightedness of the authorities, positive changes in Polish cities can be observed: cleaning the centres, investing in roads, new investments in the public space. We should also remember that cities face structural problems which cannot be solved fast and easily (growing population, underinvesting, unsettled property issues).

The traditional lack of interest in art of the wider audience must be added to this picture. However, artistic action in the city has many forms. After all, statues are public art. In the last few years Polish cities have been flooded with statuary art (which demonstrates the desire to shape the collective memory). Street furniture is also included in it: fountains, benches, kiosks, development of squares. Another form of artistic action in the city space, known as street art, are the actions of anonymous artists who usually communicate anarchist messages.

As to visual artists’ activities, they are scarce, for they often do not need confrontation with mass audiences and are not attractive enough for cities to be commissioned. I have even heard that public art, understood as contemporary artists’ work in the city space, is devoid of sense because it is completely incompatible. It is obviously untrue. But the truth is that working in the streets creates totally different conditions for practitioners of public art. They have to get used to dealing with a random audience, unaccustomed to read art. I am of the opinion that introducing objects, actions, projections which are ambiguous because of being art makes a significant contribution to the meaning of the public space.
It adds the unexpected, the surprising, dissimilar to the functions of this space. It disables one-dimensional, usual perception. It gives people a chance to use such a space more fully because it makes them stop, think, observe, establish contact, interact with others, with the work of art, with the artist.

Events like that are becoming more and more popular, among artists but also the decision-makers, who begin to see their potential of making the city more attractive. A wave of events presenting art in the public domain began after 2000. Among them are, for example, exhibitions in Cieszyn (2004), Kostrzyn (2004), Zamość (2006), and many others, equally interesting. SURVIVAL in Wrocław stands out, for it is probably the only review of art in the city which has taken place regularly since 2003 and was initiated by inhabitants of Wrocław, thus not being an effect of some visitors’ ‘landing’.

***
The strategy of surviving in the city. This is what is included in the name of the Wrocław review which presents contemporary art outside the gallery, in the streets, squares, inside public buildings and private flats. The word ‘survival’ means the ability to make it through difficult conditions, the struggle for survival requires special knowledge and abilities, a bit of luck and strong motivation. The city, in consequence, is defined as an environment which is unfriendly or even hostile to art. Art is what needs special means of defence in order to survive.

The organisers surely treat the name with some distance. But indeed it can be concluded that art outside art galleries, where hardly anyone disturbs it, must justify its existence, struggle for attention, and art-makers should be sensitive to how their works may be received. It is no bed of roses, for art in the streets, backyards or squares must compete for attention with things which provide stronger stimuli; it must also take into consideration the fact that art in the street is watched differently, in a hurry, without concentration, in a brief, fleeting way. In this sense, the city is indeed hostile to art, which requires time, stopping.